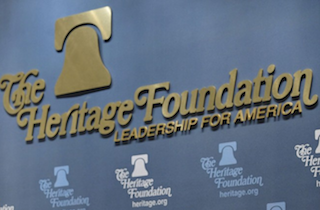 According to The Washington Post’s Dana Milbank, things got “ugly” during a Heritage Foundation-sponsored panel on Benghazi Monday afternoon after a Muslim law student rose to confront the speakers for portraying all Muslims as “bad” people.

“What began as a session purportedly about ‘unanswered questions’ surrounding the September 2012 attacks on U.S. facilities in Libya deteriorated into the ugly taunting of a woman in the room who wore an Islamic head covering,” Milbank wrote.

He went on to describe the scene when Saba Ahmed, a law student at American University, spoke softly from the back of the room. “We portray Islam and all Muslims as bad, but there’s 1.8 billion followers of Islam,” she said. “We have 8 million-plus Muslim Americans in this country and I don’t see them represented here.”

Panelist Brigitte Gabriel of a group called ACT! for America pounced. She said “180 million to 300 million” Muslims are “dedicated to the destruction of Western civilization.” She told Ahmed that the “peaceful majority were irrelevant” in the attacks of Sept. 11, 2001, and she drew a Hitler comparison: “Most Germans were peaceful, yet the Nazis drove the agenda and as a result, 60 million died.”

“Are you an American?” Gabriel demanded of Ahmed, after accusing her of taking “the limelight” and before informing her that her “political correctness” belongs “in the garbage.”

“Where are the others speaking out?” Ahmed was asked. This drew an extended standing ovation from the nearly 150 people in the room, complete with cheers.

The panel’s moderator, conservative radio host Chris Plante, grinned and joined in the assault. “Can you tell me who the head of the Muslim peace movement is?” he demanded of Ahmed.

Ahmed answered quietly, as before. “I guess it’s me right now,” she said.

As Milbank describes it, Ahmed reacted calmly to being deemed “irrelevant” by the panel. “As a peaceful American Muslim,” she told them, “I would like to think I’m not that irrelevant.”

More about the event at washingtonpost.com.

You can see Brigitte Gabriel in action in the video below, from an August 2013 segment on Fox News’ Hannity: