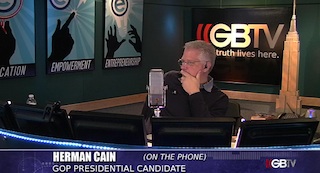 Herman Cain appeared on Glenn Beck’s radio show today and the interview started particularly goofy and light with Beck playing sexy music while Cain described his “999” plan for some “Conservative eroticism.” However, once that was done, the interview took a more serious turn as both Cain and Beck described their beliefs that the Occupy Wall Street protesters are, at best, trying to distract from Barack Obama’s failings and, at worst, trying to sow revolution.

These theories were nothing new for Beck but seemed fairly strong coming from a presidential candidate.

It started when Beck asked Cain his thoughts on the protest:

The idea that they are shills for the president would probably be news to some of the protesters who are just as angry at Obama for not being hard enough on the banks involved in the economic recession.

Cain went on to say that, if the protesters just wanted people to go to jail over those crimes, that would be one thing. But, if they want taxes to penalize those who have been successful, they’re advocating “class warfare.”

Beck took it further, bringing up his belief that the entire thing has been organized by the likes of Stephen Lerner and the SEIU who have been plotting it for months or years to bring about a full revolution (the Lerner connection is something Beck began advocating after finding what he believed was a video taped confession last March).

Cain replied that he had assumed they were behind it but didn’t have the information yet. Beck promised to send it to him and Cain said that would be very helpful.