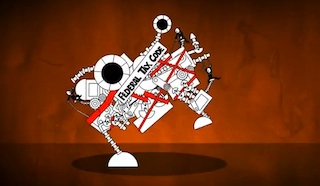 I’m going to be honest, I was worried when I saw the title of the new ad from the Herman Cain campaign; “9-9-9: The Movie.” Surely this was another example of one of the worst blights to fall upon politics in the last decade, the campaign ad that tries to disguise itself as a trailer for the world’s worst Michael Bay movie. Fortunately though, we got a reprieve. It turns out that the ad’s title just referred to the fact that it’s really long!

In all seriousness though, coming from the campaign that’s brought us two of the most bizarre and poorly-planned ads in political history, the new video is incredibly professional-looking and well done.

The video returns to the plan that vaulted Cain to being a front runner in the first place. No, not his ingenius plan of “Don’t be Mitt Romney,” but rather his flat tax, 999 plan. It explains the plan and what the campaign hopes it will do to the economy simply and with the aid of cute, stylized animation. In fact, the ad is so straight forward that its occasional, quick detours to mock liberals (Al Gore drives an electric car! What an idiot! Am I right? AM I RIGHT?) feel shoehorned in and forced like a desperate teacher writing Justin Bieber into his test questions for fear of losing his students’ attention.

All in all, unlike some of the videos in the past, the new work appears to be the ad of a serious candidate. Watch it below: