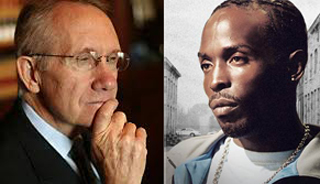 I remember a few years ago, during the build up to the fifth and final season of HBO’s The Wire. The show had flown under the radar for years, hiding from the mainstream due to its complicated plots, unknown cast, and shameful awards season invisibility. However, after the absolute brilliance of the fourth season, no one could ignore The Wire anymore. Suddenly, with the final season coming up, every TV writer and cultural critic worth their weight in TV Guide issues was writing think pieces asking “Is The Wire the greatest TV show ever?” HBO threw the old seasons up on Netflix and everyone who had been missing out greedily caught up as we all awaited the televised nirvana that David Simon surely had planned. Then, when the fifth season finally aired and focussed on a slightly outlandish serial killer plot, it was only inevitable that people were disappointed. Suddenly, you couldn’t have a single conversation about Bubble’s hard fought redemption without jackasses feeling the need to remind you, “Hey, it’s not as good as last year.”

This is basically what Harry Reid appears to be doing with Mitt Romney’s tax returns.

RELATED: Sen. Harry Reid Has No Intention Of Backing Down On Romney Tax Accusations

For a while now, one of the biggest symbolic weapons the Democrats had against Mitt Romney has been his refusal to release years and years of tax returns because “we people” didn’t deserve to look at them. We already know that the Romneys have used tons of the offshore bank accounts and tax loopholes that the extreme rich use to, you know, “bend” the rules that us regular people abide by. So it only makes sense to assume that the reason he’s keeping his returns under lock, key, a vault, an alarm system, and a private security firm is because they hold more proof of the same. And he and his campaign are in a lose/lose situation. The returns will probably look bad when they’re released, but the longer he keeps them secret, the more the voters’ imaginations can run wild.

It’s like Stephen Spielberg hiding the shark in Jaws. Unfortunately, Harry Reid is going to ruin everything by draining the water and showing the crappy shark robot underneath.

Hold up. I’m using too many entertainment metaphors. Let me back up to what Reid’s actually doing.

Harry Reid talked to the Huffington Post and gave them allegations he heard from some supposed former Bain employee that Romney didn’t pay any taxes for a decade. Instantly, the story stopped being about Romney and became about Reid and the Romney Defense Coalition took up their posts for nonstop segments on Fox News about how “irresponsible” the Senate Majority Leader is. Seriously, that guy’s been mentioned more times on that network in the past two days than gold, silver, and the threats of socialist pop singers combined.

And, despite the fact that his most thorough dressing down came not from Fox News but actually Jon Stewart, Reid went ahead and kept up the attacks today. The problem is, Reid isn’t just giving the Republicans a good distraction now, he’s also giving them a good one for when the returns are actually released.

Like I said earlier, it’s very likely that the returns are hiding something bad for Romney. However, it’s not likely that they’ll be as clearly evil as Reid’s claiming. We’re just not that lucky. So, when the returns finally come to light and Romney’s malfeasance is something so nuanced and complicated that it takes tax experts 10 minutes to properly explain them on cable news, 99% of voters are going to be too disappointed to notice the actual details. They’ll be just like those Wire viewers from a few years ago; “Yeah, this is fine but it’s not as good as Harry said it would be.”

So, please, Sen. Reid, with all due respect, shut up.

Oh, and while we’re at it, can everyone shut up about those new Arrested Development episodes too? You’re just going to make them disappointing as well.