PIZZA IN THE GATE 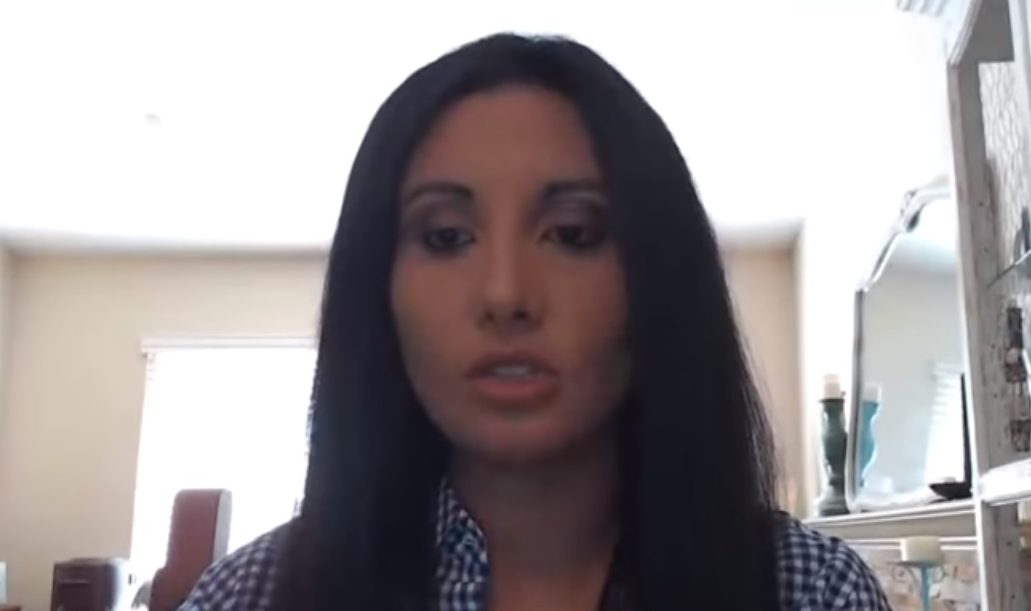 Health and Human Services official Ximena Barreto publicly apologized recently for her “heated and hyper-passionate” tweets on race and far-right conspiracies, after they were reported on by CNN.

She made her Twitter account private, and held on to her government job. But on that now-private account, she’s been unapologetic — recently calling the reports exposing her fringe views a “smear campaign.”

The Department of Health and Human Services is tasked with implementing health and welfare-related programs. Recently, the department came under fire for losing track of more than a thousand unaccompanied immigrant children that crossed the southern border and were placed with adult sponsors.

After her apology, Barreto, who worked as a far-right media personality before joining HHS in December 2017, was allowed to keep her Trump administration job — albeit, with a demotion from her old deputy director of communications post. But her private comment attacking CNN for reporting on her controversial posts suggests she is far from repentant.

“Locked my account after CNNs smear campaign,” Barreto wrote on June 14 in response to a follower asking why they can’t retweet her posts. “[I] received too many threats and packages delivered to my home.”

Barreto did not offer evidence to followers proving her claim that she was doxxed and is receiving threats. It is also not clear how making her Twitter private would deter these supposed threats, but a locked account certainly allows her to recant her public apology to her fan base without her employers at HHS seeing.

The Department of Health and Human Services and Barreto were contacted repeatedly via email and phone for comment, but did not respond. After this reporter asked for comment, Barreto shut down her private Twitter account and deleted her tweet calling the CNN articles on her views a “smear campaign.”

In past reports on Barreto’s extreme views, the right-wing media watchdog group Media Matters found that the HHS official made racist attacks against African-Americans, called Islam a “cult,” and pushed the Pizzagate conspiracy. An investigation from CNN’s KFile team found that Barreto had shared a picture calling for the hanging of Hillary Clinton and Barack Obama for “treason,” as well as pushed the Seth Rich murder conspiracy.

Mediaite obtained screenshots of Barreto’s Twitter feed that show she pushed Pizzagate — an absurd conspiracy theory that claims the Clintons, the Podesta brothers, and other Democrats ran a child sex trafficking ring in a D.C. pizza restaurant — far more than previously reported.

“That time when andrew breitbart calls out @johnpodesta for being a pedophile #HeKnew,” Barreto tweeted in March 2017 — echoing the baseless conspiracy claiming Breitbart was murdered because he was trying to expose Democrats ties to pedophile rings (Breitbart actually died due to congestive heart failure). 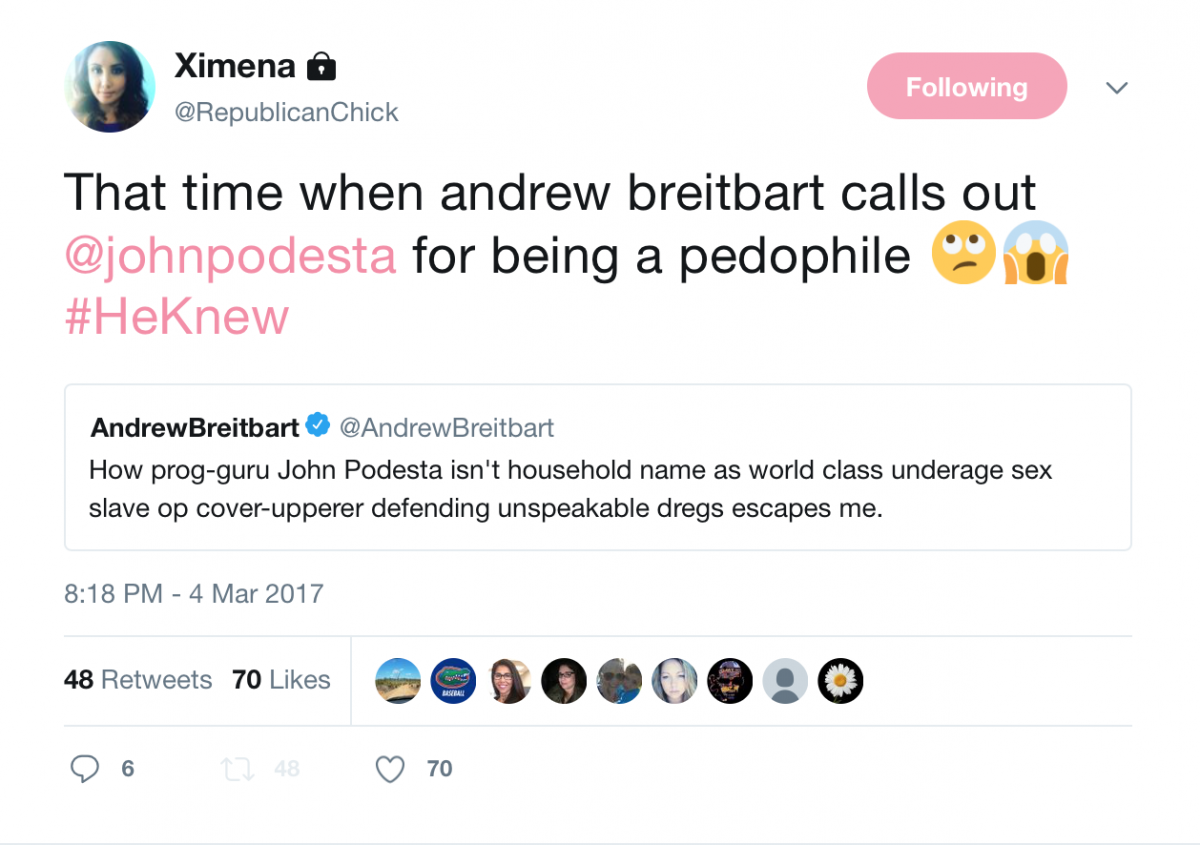 She continued this claim in other tweets, writing that “@AndrewBreitbart definitely knew of #PizzaGate before passing!” and quote tweeting an old Breitbart tweet with just the hashtag “#Pizzagate.”‘

The so-called “spirit cooking” conspiracy, which alleges — without evidence — that John Podesta, his lobbyist brother Tony Podesta, and other high profile Democrats practice Satanic rituals that involve preying upon young children, was another conspiracy that Barreto frequently pushed.

“@johnpodesta why have you not tweet since nov 7th? Having too much pizza at spirit cooking parties? Or playing dominoes? #PizzaGate,” Barreto tweeted in late November 2016. 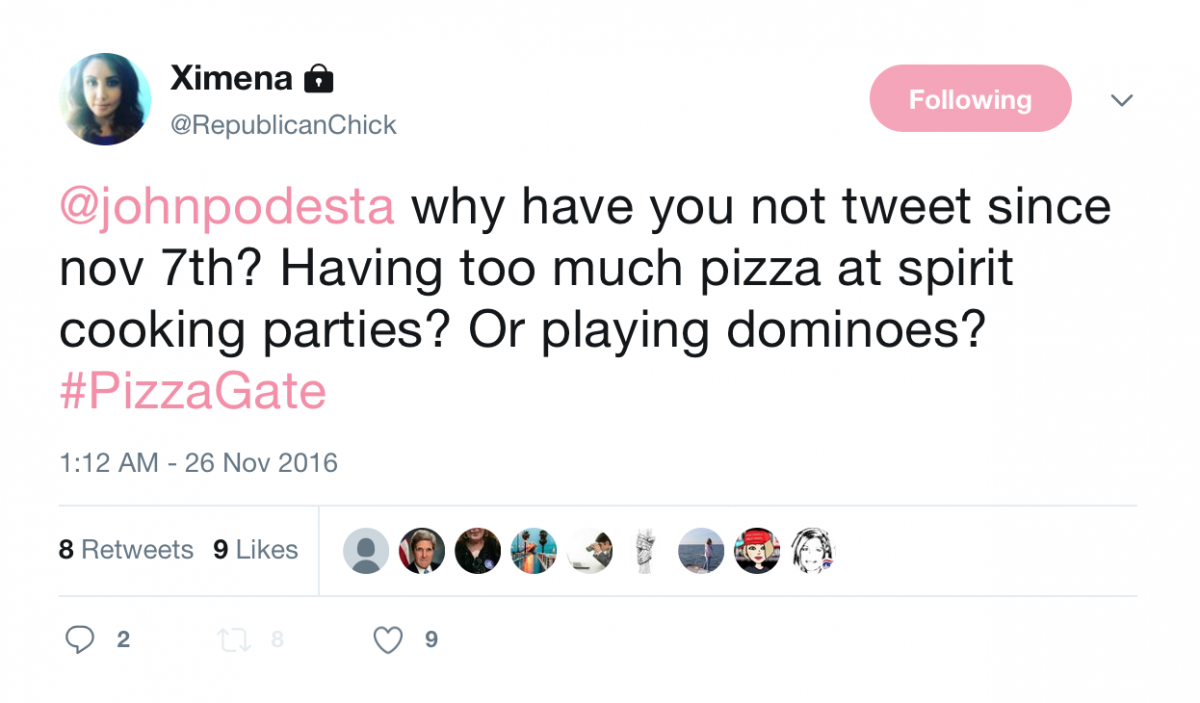 In another tweet, Barreto claimed liberals use “children… in their #SpiritCooking parties.” She pushed the same claim when someone responded to one of her posts, writing, “Are u into the pedophile satanic stuff that podesta is in?”

She also connected the Pizzagate and spirit cooking conspiracies to the rapper Jay-Z, who was a Clinton supporter, tweeting, “Didn’t jay z sold crack? And shoot his brother? #BasketOfCriminals #SpiritCooking.”

“#SpiritCooking Romans 16:20 The God of peace will soon crush Satan under your feet,” tweeted the HHS official, alongside a meme that read, “There is no election in 2016. There is only the trial of Crooked Hillary. On November 8th, vote guilty.” 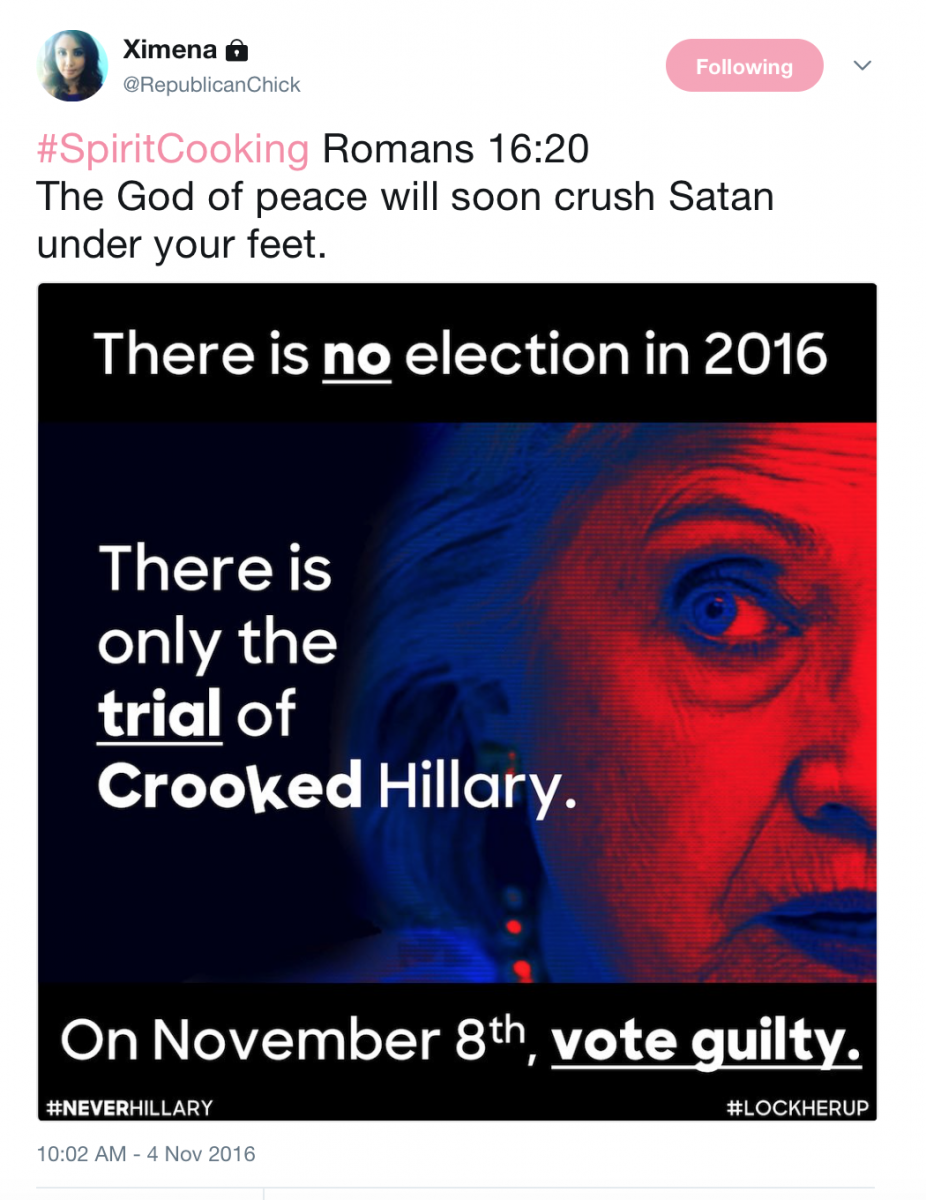 Her other contributions to fighting the nonexistent pedophile ring include accusing Hillary Clinton of “trying to distract us from #PizzaGate,” invoking the supposed “Pedophile dinners” of Democrats to excuse Russian election tampering, and stating that Clinton should still be held responsible for “#PizzaGate #BillsVictims and all the things she has done wrong.”

In total, Mediaite found that Barreto tweeted about variations of the Pizzagate conspiracy at least 17 times. Additionally, she spoke at length about Pizzagate in a Periscope video, as detailed by the Media Matters report.

Her other controversial posts include Barreto saying, “Islam [is] a cult that oppresses women, kills gays and wants us all dead,” as well as claiming all Muslims “practicing Islam” are terrorists because “their religion is barbaric.” Barreto also pushed the Seth Rich conspiracy in three separate tweets, using the hashtags “#KilledByTheDNC,” “#HillaryBodyCount,” “#ClintonBodyBags,” “#SethRich,” “#Hero,” and “#RIP.”