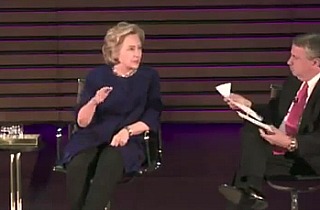 Appearing at the Women of the World Summit in New York City on Thursday, former Secretary of State Hillary Clinton was asked what she is “most proud of” when she served in President Barack Obama‘s Cabinet. Clinton said that serving in government is more of a “relay race” and that the administration’s focus on the economic recovery was one of it’s greatest accomplishments.

“I really see my role as Secretary, in fact leadership in general in a democracy, as a relay race,” Clinton asserted. “When you run the best race you can run, you hand off the baton. Some of what hasn’t been finished may go on to be finished.”

“So, when President Obama asked me to be Secretary of State I agreed, we had the worst economic crisis since the Great Depression, we had two wars, we had continuing threats from all kinds of corners around the world that we had to deal with,” she continued.

“I’m very proud of the stabilization and the really solid leadership that the administration provided that I think now, leads us to be able to deal with problems like Ukraine because we’re not so worried about a massive collapse in Europe and China — trying to figure out to do with all their bond holdings and all the problems we were obsessed with,” Clinton concluded. “I think we really restored American leadership in the best sense.”

Watch the clip, via America Rising: