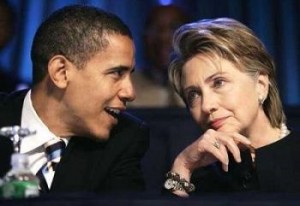 In a recent op-ed for The Wall Street Journal, Fox News contributors Pat Caddell and Doug Schoen urged President Obama to “abandon his candidacy for re-election” in favor of “the one candidate who would become, by acclamation, the nominee of the Democratic Party: Secretary of State Hillary Clinton.”

Their premise is that Sec. Clinton not only has a better chance to win, but “is the only leader capable of uniting the country around a bipartisan economic and foreign policy.”

Now, most liberals will take one look at that byline and say “Who cares what a couple of ‘Fox News Democrats’ have to say?”

That’s an excellent point, not because Schoen and Caddell are Fox News contributors, but because their idea is so laughably unserious, it really doesn’t merit any pushback. Aside from conservatives who already hate President Obama, there’s really only one audience for this: the remnants of disaffected Hillary Clinton supporters who still haven’t gotten over the bitter 2008 Democratic primary. It is out of affection for them that I even bother writing about this.

Let’s set aside the “merits” of Caddell and Schoen’s premise that the President could govern more effectively as a lame duck, or that President Obama has been the “overtly partisan” cause of “two years of political gridlock at a time when we can ill afford it.”

Concede, even, that Hillary Clinton could win a Democratic primary. She was an excellent candidate in 2008, but she ran a disastrous campaign, overseen by Schoen partner Mark Penn. This time would hopefully be better. Schoen and Caddell labor under a fantasy that has overtaken many a Clintonista, and has been fueled by lots of conservative pro-Hillary talk since 2008:

But this is about more than electoral politics. Not only is Mrs. Clinton better positioned to win in 2012 than Mr. Obama, but she is better positioned to govern if she does. Given her strong public support, she has the ability to step above partisan politics, reach out to Republicans, change the dialogue, and break the gridlock in Washington.

When faced with the choice between Hillary Clinton and Barack Obama in 2008, and with Obama’s election to the presidency, conservatives began to talk Hillary up, and have continued to do so since, constructing the myth that President Hillary Clinton could have united the country in a bipartisan Shangri-La with her new Republican admirers. Those who believe this have been taken in by a crocodile’s grin.

As an alternative to Barack Obama, conservatives love Hillary Clinton, but without him to kick around, they would almost certainly revert to their default position on all things Clinton. Have these people forgotten how much the right wing absolutely hated Hillary Clinton?

As bad as the anti-Obama craziness has been, it was ten times worse for the Clintons, especially Hillary. President Obama gets accused of being a secret Muslim, or a covert Kenyan, but back in the day, these people actually accused Hillary Clinton of murder. That’s just what they would say openly. You wouldn’t believe the craziness that bubbled and squeaked in the wingnut-o-sphere for years.

Republicans aren’t obstructing Barack Obama because they want to share power with the right Democrat, they’re obstructing President Obama because they want to take power from the Democrats. Whatever you see them doing now to President Obama, they would multiply exponentially under President Clinton II. That kind of argument, though, appeals to many Democrats, who never met a Republican they couldn’t roll over for.

Hillary Clinton may run for president in 2016, and if she does, I hope she wins, but the idea that Republicans would be tripping over themselves to help her govern is sheer fantasy.