Hillary Clinton said today that it’s just awful that Donald Trump is feeding into the idea that President Barack Obama is a Muslim and was born in Kenya, despite the fact that those notions were actively propagated by her own camp.

Let’s flashback to 2008: Clinton is locked in a heated primary battle with Obama, with nasty accusations being flung on both sides. But Obama has begun to pull and away and Clinton seems doomed when, lo and behold, a certain image ends up the featured image on the Drudge Report: 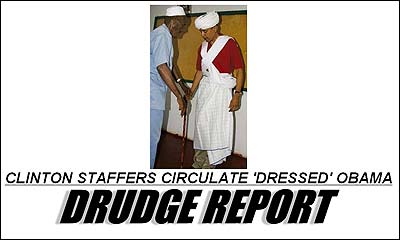 Clicking the link brought up a Drudge exclusive, reporting that Clinton staffers circulated the image via email. “Wouldn’t we be seeing this on the cover of every magazine if it were [Hillary]?” one Clinton staffer complained.

The Obama camp went ballistic, calling it “the most shameful, offensive fear-mongering we’ve seen from either party in this election.” Clinton aides at first brushed off the story entirely, but then denied having ever sent it. Even though, months earlier, the campaign was forced to fire two Iowa staffers caught forwarding an email saying Obama was a Muslim.

Then there were the comments from campaign surrogate Nebraska Sen. Bob Kerrey when he announced his support for Clinton. “It’s probably not something that appeals to him, but I like the fact that his name is Barack Hussein Obama, and that his father was a Muslim and that his paternal grandmother is a Muslim,” Kerrey said. Because who doesn’t compliment someone by bringing up two extremely touchy topics with voters in the Muslim-friendly locality of Council Bluffs, Iowa?

Even when Clinton herself denounced the rumors, it sounded about as sincere as… well, everything else she says. Clinton seemingly left the door open for the possibility that Obama was a Muslim, saying he was a Christian… “as far as I know.”

To put this all in perspective: Once upon a time, the freakin’ FreeRepublic was making fun of Hillary Clinton for spreading the notion that Obama was a Muslim. Let that sink in.

At least with the Obama-is-a-Muslim rumor, Clinton supporters can only be accused of playing into a nasty rumor that already existed on the right. But birtherism was their own invention, created by desperate supporters when it appeared all but inevitable that Obama would net the Democratic nomination.

From Politico‘s “Birtherism: Where It All Began“:

The answer lies in Democratic, not Republican politics, and in the bitter, exhausting spring of 2008. At the time, the Democratic presidential primary was slipping away from Hillary Clinton and some of her most passionate supporters grasped for something, anything that would deal a final reversal to Barack Obama.

[…] That theory first emerged in the spring of 2008, as Clinton supporters circulated an anonymous email questioning Obama’s citizenship.

“Barack Obama’s mother was living in Kenya with his Arab-African father late in her pregnancy. She was not allowed to travel by plane then, so Barack Obama was born there and his mother then took him to Hawaii to register his birth,” asserted one chain email that surfaced on the urban legend site Snopes.com in April 2008.

The article goes on to note that the first person to attach his name to the theory was one Peter Berg, a self-described Hillary Clinton supporter who also challenged John McCain‘s candidacy because he was born in the Panama Canal Zone.

I say all this not to excuse Trump — and the disreputable branch of conservatism he’s now come to represent. But when it comes to politicians tolerating those rumors among their supporters and staff, Clinton’s throwing stones in a glass house.