Hillary: Republicans Are Trying to ‘Confuse the Electorate’ About Me 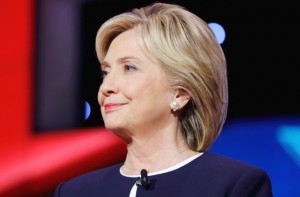 Hillary Clinton is on the cover of Time Magazine this week for an interview she did with Joe Klein about the campaign. They talked a lot about Iowa, Clinton’s passions, and Bernie Sanders, but the Democratic frontrunner also got a little personal.

She talked about running on a platform of progress and rejecting “the insult, the scapegoating, the anger” that has popped up elsewhere in the campaign.

Which brings us to the email controversy. Clinton yesterday said the vast right-wing conspiracy is alive and well, and when asked about the emails to Klein, Clinton dismissed the uproar thusly:

KLEIN: How are you going to get past this?

CLINTON: The same way I did Benghazi, by actually stating the facts over and over and over again, despite the Republicans’ best efforts to try to confuse the electorate, to try to create an issue where there was none and then testify for 11 hours and there will be some who will continue to raise it, but it has certainly gotten absorbed through the body politic. This will as well.

She said Republicans are perfectly nice to her and praise her… when she’s not running for election.