Hypocrisy Now: Why Isn’t Palin Calling For Limbaugh And Beck To Be Axed?
video

Hypocrisy Now: Why Isn’t Palin Calling For Limbaugh And Beck To Be Axed? 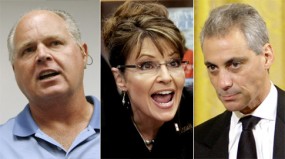 I think Sarah Palin may have painted herself into a rather uncomfortable ‘politically correct’ corner this week. As valid as her outrage over Rahm Emanuel’s (and many, many others) derogatory use of the word “retarded” (last November, behind closed doors) may be her tepid response to Rush Limbaugh’s very recent, very public use of the word yesterday leaves a lot to be desired. Let’s compare shall we.

I would ask the president to show decency in this process by eliminating one member of that inner circle, Mr. Rahm Emanuel, and not allow Rahm’s continued indecent tactics to cloud efforts. Yes, Rahm is known for his caustic, crude references about those with whom he disagrees, but his recent tirade against participants in a strategy session was such a strong slap in many American faces that our president is doing himself a disservice by seeming to condone Rahm’s recent sick and offensive tactic. The Obama Administration’s Chief of Staff scolded participants, calling them, “F—ing retarded,” according to several participants, as reported in the Wall Street Journal. Just as we’d be appalled if any public figure of Rahm’s stature ever used the “N-word” or other such inappropriate language, Rahm’s slur on all God’s children with cognitive and developmental disabilities – and the people who love them – is unacceptable, and it’s heartbreaking.

Palin’s spokesperson responds to Limbaugh’s repeated use of the word during his very public, much-listened to show earlier the week:

“Governor Palin believes crude and demeaning name calling at the expense of others is disrespectful.”

You could drive and entire political party through the difference in those responses. While we’re on the topic, if Emanuel’s outburst of last November is up for grabs why not “second most popular television person” Glenn Beck’s far more offensive remarks about children from January of last year? Via Media Matters: “Beck, laughing, to Mary Lynn Rajskub: “What do the paintings of the retarded children go for?” Meanwhile, Keith Olbermann states that Beck’s use of the word were to numerous to count (video below). Surely, Palin’s politically correct police are not just out to get, gasp, Democrats? Or is it just the “bold and patriotic, fair and balanced media folks” people she refers to in her acknowledgment section of Going Rogue (Beck and Limbaugh are both included in this list) who are exempt? (Says Richard Wolffe on Olbermann: If you can’t stand up to a talk radio host how are you going to confront Putin?”)

Surely, in the public sphere of “harmful language” Limbaugh and Beck wield far more clout than Emanuel. The answer is twofold: Palin is a hypocrite who knows where her bread is buttered, secondly, she likely did not think this outburst through. She is making a reasonable point. And it is reasonable to call Emanuel out for it. What was dumb was calling for something as strident as his firing.

That said, if Palin were really the savvy politician her supporters (and many others) seem to think she is she might take this as an opportunity to paint Limbaugh (whose recent comments about Haiti have put him on somewhat shaky ground) in less than flattering light, and in doing so establish herself as the real defacto head of the GOP. There are a lot of mothers (families, really) who would likely take her side on this over Limbaugh’s. If you’re interested Keith Olbermann similarly weighs in on the matter below.