Hold Your Benghazm, None of Those 22 New Hillary Emails Were Classified When They Were Sent
Opinion
video

Hold Your Benghazm, None of Those 22 New Hillary Emails Were Classified When They Were Sent 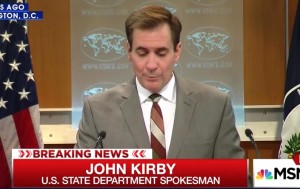 The right-wing media is going absolutely Caligula over Friday’s revelation that 22 emails from the State Department’s most recent dump of Hillary Clinton communications “Were Top Secret,” and she’s obviously headed to jail. Over at Redstate, they’re so excited they’ve actually had to call their doctor already, and it hasn’t even been four hours:

Hillary Clinton used a private server for her entire term as Secretary of State. She transmitted classified and top secret information to and from that address. 22 of the e-mails that the government does have are clearly top secret. This will have big implications for Clinton, who is seeking the Democratic nomination for president.

Not so fast, there. I know that since the email “scandal” began, it has become a mainstream media pastime not to ever mention this, but these 22 emails, and every other email that journalists mainstream and conservative have gotten all sweaty over, were not marked classified when they were sent or received. If only some sort of talk-guy from the government thingy that Hillary worked for would just come out and say that, so people could prominently report that highly relevant fact that means Hillary won’t be going anywhere near a courtroom:

I can confirm that as part of this monthly production of Hillary Clinton’s e-mails, the State Department will be denying in full seven e-mail chains found in 22 documents representing 37 pages. The documents are being upgraded at the request of the intelligence community because they contain a category of top secret information. These documents were not marked classified at the time that they were sent.”

That was U.S. State Department Spokesman John Kirby, for those of you playing along at home. Watch below, via MSNBC

You can certainly think the email server was a bad idea, and you can also hope against hope that something somehow turns up, but what you really shouldn’t do, especially if you’re a mainstream news organization, is say that the emails “were top secret” when they weren’t. It confuses the right-wingers.