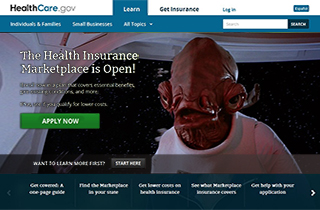 Some liberals are freaking out over former President Bill Clinton‘s suggestion that President Obama “honor the commitment” that if you like your health insurance plan, you can keep it. Indeed, the FPOTUS’ declaration has caused a media conflict-quake, and resulted in predictable Democratic defections to Republican legislation ostensibly designed to remedy the ill-defined problem. Everybody needs to calm down, because in the political poker game that is the Affordable Care Act, Republicans are about to get check-raised.

Comparisons of President Obama to Mr. Spock have led political observers to think of him, strategically, in terms of three-dimensional chess, but the President’s game has always been poker. If you understand that, then his next move isn’t that difficult to figure out. The failing website-plagued rollout of Obamacare was definitely a bad hand for the President, and he’s still got a decent pile of chips riding on Jeff Zients‘ ability to deliver a satisfactory fix by November 30, but it was the second phase of Obamacare backlash that really raised the stakes. Story after story about people who were receiving cancellation letters (even if most of them turned out to be paying less for better insurance) put the President’s “if you like your plan, you can keep it” pledge into the spotlight.

At first, the White House defended that pledge by pointing out the grandfather clause in the Affordable Care Act, and patiently explaining that it is absolutely true that nothing in the law keeps insurance companies from offering pre-Obamacare plans. Ironically, Sarah Palin explained the rub in the grandfather clause perfectly when she told Matt Lauer that “If it’s going to cost you more, then it’s not the same policy.”

As the (poorly reported, misleading, and just plain wrong) cancellation stories continued, and outrage mounted, the President gave an interview to NBC News’ Chuck Todd in which he made an ill-defined apology, and an even more ill-defined promise:

…“We’ve got to work hard to make sure that they know we hear them and we are going to do everything we can to deal with folks who find themselves in a tough position as a consequence of this.”

The opening defenses and the apology were, in poker parlance, a limp call and a check, designed to keep the President in the hand, without risking any more chips. Since Obamacare is the signature achievement of his presidency (not to mention a crucial lifeline to millions of Americans), the President can’t fold. He’s pot-committed. The cards aren’t falling in his favor, though, so he can’t raise. He’s just got to limp along and hope his situation improves.

Republicans, meanwhile, sense weakness, and push a huge pile of chips into the pot. The President lied! People being cancelled must be protected! On this, all depends! Then, along comes Bill Clinton to raise the pot some more, and as Republicans happily come along, several Democrats are already folding. It’s unclear whether Bubba is in on this play, but what he has done is handed President Obama a shot at winning this hand, or at least chopping the pot.

At this point, the Republicans’ chips are riding on something called the “Keep Your Health Plan Act of 2013,” which will “authorize health insurance issuers to continue to offer for sale current individual health insurance coverage” as grandfathered ACA plans. This bill, and others like it, have received signs of support from some Democrats. Among its many problems, though, is the fact that the “Keep Your Health Plan” act is a “lie” to the exact extent that the President’s pledge was. Allowing insurance companies to continue selling pre-Obamacare plans does nothing to guarantee they will, and so, does nothing to guarantee people can “keep their plan.”

As media reports have made repetitively clear, millions of these plans have already been cancelled, and it’s not clear that insurance companies will want to voluntarily take on the monumental administrative headache of undoing all of that, especially since it means undercutting their own Obamacare policies, and the zillions of federal subsidies they stand to collect from new customers, as well as the ones they’re transitioning.

If such a bill were to gain any traction, President Obama would undoubtedly point this out, and with great regret, propose that the only practical solution is to determine just how many people are being disadvantaged by his over-promise, and to increase federal subsidies to assist them. He’ll take a fresh hit for making the promise in the first place, but those chips are already in the pot. The Republicans, though, will be forced to back up their concern for the cancelled, or muck this particular hand. Neither is a huge win for the President, but it keeps the law intact, and keeps him in the game until millions of people begin to see the benefits of Obamacare.

To be clear, this is not how I’d like to see this go. I am genuinely curious to know what the real tradeoffs of Obamacare are, but the media refuses to report on them accurately. Based on what I’ve seen so far, they appear to be minimal, and concentrated among the very well-off. There is a point at which expanding subsidies becomes gratuitous. The President’s maneuver, at the very least, will force that conversation.