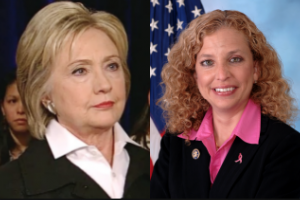 The Guccifer has landed, and it’s what we thought all along.

That’s the big news that came out this week in outlets that still perform journalism—a hacker named Guccifer breached the DNC’s files to release strategy memos on how to defeat the Donald, extensive lists of mega-donors with their contact information, and other internal party memos.

The DNC confirmed the breach, claiming it was the Russians—which made me think of some classic episode of “24.”

In it, in plain-spoken, PR-spin-doctoring language, was a game plan for the DNC to perform outreach to reporters—aka spin them like a Dreidel—in order to “muddy the waters” on behalf of HRC [Hillary Rodham Clinton] from criticism about her use of personal emails as Secretary of State and career-long bank account funded by every special interest Democrats pretend to oppose.

DNC was pushing HRC as candidate from May, 2015 of last year. #Guccifer2 pic.twitter.com/0rJcTspOvl

The strategy email also cautioned DNC operatives to leave “no fingerprints”as they “utilize reporters to drive a message.”

Want to repeat that sentence: “Utilize reporters to drive a message.” I’m waiting for Woodward or Bernstein to comment.

I kept going through the leaked emails to find the subsequent memo strategizing for how to approach reporters with information about Senator Bernie Sanders—the other candidate in the race.

Surely, I was just missing where the “Defining and Defending Socialism” document was. After all, Americans have repeatedly been told that the DNC, led by the former co-chair of Hillary Clinton’s 2008 presidential campaign, Debbie Wasserman Schultz, was a neutral body.

“The Democratic National Committee remains neutral in this primary, based on our rules,” she said on May 17, 2016—nearly a year after this document sang out loud how blatantly in the tank the body was for Clinton.

So I reached out to the DNC to get comment or confirmation on whether these documents are real. After all, the guy’s name is Guccifer. I’m a naturally cynical person with the natural default that they’re all a bunch of liars.

But, this was just too much, I thought. I expected to get a quick response debunking the memo as a fake. What I got was classic PR spin-doctoring from a top DNC official.

“Our experts are confident in their assessment that the Russian government hackers were the actors responsible for the breach detected in April, and we believe that today’s release and the claims around it may be a part of a disinformation campaign by the Russians. We’ve deployed the recommended technology so that today our systems are secure thanks to a swift response to that attack and we will continue to monitor our systems closely.”

I reached back out saying: “Respectfully, this is a non-answer. Can I get a yes or no as to the authenticity of the other documents released [Clinton strategy memo]?”

In response, the spokesperson refused to say anything on-the-record and provided more nonsense off the record.

You don’t have to go to journalism school to know this type of silence is your answer (but FYI, I’m happy to eat crow if they want to come forward and deny the authenticity of the document—72 hours later.)

Now, let’s even give the DNC some benefit of the doubt. The sender of the Clinton strategy email was not identified—it could have been a fellow DNC communications staffer sending it to all DNC staffers or it could have been a high-priced “consultant.” Hell, it could’ve been the mailman.

If we choose door number two—the consultant—what the document represents is no less damning. Political organizations don’t hire outside consultants, advisers, or lobbyists without telling them exactly what goals and deliverables they need help executing on.

Think some D.C. consulting group was told by Debbie Wasserman Schultz: “We’re really open to anything—send us a brainstorm.”

If so, I, who dropped finance after one class, have terrific stock tips for you.

In reality, it was well-known among the New York-D.C. revolving door swinging between media, politicians, lobbyists, and corporations that Debbie and the Democrats had picked their nominee.

Four months before the first debate, eight months before a single vote was cast, and a full year before an insurgent socialist from Vermont with the entire political world up against him won 22 states while bringing millions of new voters into the process.

And in between it all, she scheduled debates on holiday weekends and Sunday nights to squash viewership; front loaded Southern States favorable to Clinton to the beginning of the primary calendar; hastily suspended—without first investigating—Sen. Sanders’ campaign’s access to its own critical voter files after a rebel staffer poked into Clinton’s files (he or she was fired); said and did nothing (along with the Clinton campaign) after 126,000 Democratic voters were purged off the voter rolls in Sanders’ hometown of Brooklyn; and recklessly went on national television to condemn “violent” supporters of Sanders in Nevada for tossing non-existent chairs at the State Convention.

For good measure, she criticized Sanders’ statement on the matter, saying he didn’t go far enough in condemning his supporters’ “violence” and had the audacity to include the word BUT in his statement.

Only problem—there was no documented violence at the convention. As I wrote previously, no video evidence ever existed of such a thing—in journalism, kind of a key element to confirm such a violent act occurred. Debbie Downer wasn’t even there: like in the case with suspending Sanders’ voter files, she acted first, investigated never.

So when TV news pundits like Chris Matthews do what they do best—condescend to Sanders and his legion of loyal supporters—by laughing at claims that the primary system was rigged against him, they remain comfortably tucked inside their horse race bubble.

One that lacks any critical thinking, healthy cynicism, or basic common sense. One that insults the intelligence of millions of Americans who fought hard to elect Bernie Sanders—who knocked on doors, who attended rallies, who crisscrossed the country on his behalf, who donated discretionary money they really couldn’t afford to help him compete.

Don’t tell them the Democratic Party didn’t stack the deck in favor of Clinton from day 1—we now have it in writing.

Wait: mission accomplished. Not one television news anchor on CNN or MSNBC reported to its audience the existence of this Clinton-supporting strategy memo and the subsequent non-denial of its authenticity from the DNC. Interestingly, they did report on the Trump strategy memo, leaked by the same hacker.

I guess their complicity in the whole thing—by swimming in the same muddy waters as DNC operatives—would make that kind of awkward, huh?

And of course, many reporters along the way did the bidding the Clinton memo outlined—in some cases, openly prepping them with questions before going on-air.

If not for independent media like The Young Turks—and some truth tellers within corporate media like Shaun King of The Daily News—this story would’ve never come out.

So the next time I get a lecture on the values of journalistic “neutrality”—which is a mystical illusion establishment journalists pretend to embody—I’ll have the DNC/HRC memo on hand.

The one, in black and white, showing how the DNC and its media allies conned us into Clinton.

Jordan Chariton is a Politics Reporter for The Young Turks, covering the presidential campaign trail, where he’s interviewing voters on both sides along with candidates. Follow him @JordanChariton and watch videos at YouTube.com/tytpolitics