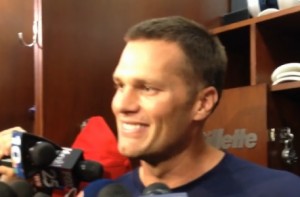 Yes, the day of reckoning has at last arrived for Mr. Brady vis-a-vis deflategate.  The four-time Super Bowl winning quarterback is under suspension for his role in the deflated balls controversy.

Jimmy Garropolo gets the call in Brady’s absence. And he won’t have a full complement of weapons at his disposal. Rob Gronkowski will miss the season opener with a hamstring injury. Starting offensive linemen Nate Solder and Jonathan Cooper have also been ruled out due to injury, meaning Garropolo will probably spend much of the night on the run from the Cardinals’ front four.

The Cardinals are expecting big things in 2016, following a run to the NFC title game last year — where they were blown out by Carolina. Carson Palmer returns for Arizona at QB. He’ll have some question marks in front of him on the offensive line, as the team breaks in a new center and right tackle. Also for Arizona, the honey badger, Tyronn Mathieu, is expected to return to action after an ACL tear last season.

Kickoff is at 8:30 p.m. ET. The game will be broadcast on NBC. Al Michaels and Cris Collinsworth have the call. NBC will stream the game on its website, or you can use either the NBC Sports app or the NFL Mobile app to watch on your phone or tablet. Those apps can be downloaded from the Apple App Store, Google Play, and the Windows Store.