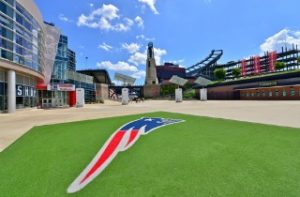 Between them, New England Patriots quarterback Tom Brady and Pittsburgh Steelers quarterback Ben Roethlisberger have won six Super Bowl titles in their storied careers. On Sunday, they’ll meet to determine which of them will have a shot at another.

New England struggled for a bit last week in a closer than the final score indicated 34-16 victory over Houston. The Texans’ star defensive lineman Jadaveon Clowney was able to get to Brady on multiple occasions and disrupt the Patriots’ passing attack. Still, New England got the job done by a fairly comfortable margin in the end. One more win, and Brady will make a remarkable seventh appearance in the Super Bowl.

The Steelers eked out an 18-16 road win against Kansas City last Sunday to earn their spot in the AFC title game. It wasn’t Pittsburgh’s best offensive game. But they figure to put some more points on the board this week. They’ll have to, with New England’s prolific passing attack on the other side.

Two great franchises. One spot in Houston up for grabs. It’s the AFC Championship game, under the lights on Sunday night in Foxborough.

Kickoff is at 6:30 p.m. ET. The game will air on CBS, with Jim Nantz and Phil Simms on the call. CBS will stream the game via its All Access platform (which costs $5.99 per month, but does offer a one-week free trial to new customers). Certain cable providers also offer the ability to stream CBS online.