Howard Stern Predicts Trump Will Be GOP Nominee: He ‘Gets Sh*t Done’ 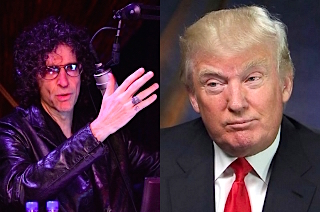 Howard Stern went way out on a limb on Monday and predicted that Donald Trump will win the GOP nomination for president in 2016.

“I had some friends over for dinner and we were of course talking about Trump,” Stern said on his SiriusXM show. “People are saying, we don’t think Trump’s going to be the nominee. I said, I’ll tell you what: I think he is.”

“I’ll tell you why I think he’s going to be the nominee: he’s proven that no matter what he says, people dig him,” the host added later. “And I also think that a lot of people are of the mind that — they hate illegal immigrants, but they just feel funny saying it, whether it’s rational or not. Is the illegal immigrant draining your economy? Possibly. Is he taking your job? Possibly.”

“But I think more or less, people are super tired of politicians, meaning that they like the idea of a successful businessman running the country who might actually be able to get shit done,” Stern continued, before comparing Trump to “b-list movie star” Ronald Reagan. “And so they are looking back toward those days and hey maybe that’s the answer. Forget all these politicians who are professionals, we want to try somebody who is used to a business kind of thing.”

During Trump’s dust-up with Fox News’ Megyn Kelly, he highlighted her past appearances on Stern’s show, in which she discussed her sex life as evidence that she is not as “innocent” as she claims to be:

New York Magazine’s Gabriel Sherman reported that Stern himself called Trump to remind him about the content of Kelly’s appearance, but Stern denied that claim on his show last week, offering the reporter “a million dollars if he could prove that this is true, because it’s not true.”