Huntsman: ‘I Wouldn’t Necessarily Trust Any Of My Opponents Right Now’ On The Economy 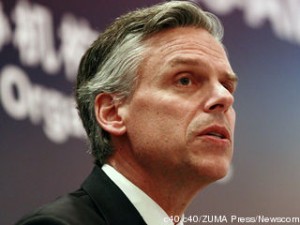 Call him crazy, but former Utah Gov. and former Ambassador to China Jon Huntsman is doubling down on his criticism of climate change skepticism as “not a winning formula” for the GOP in 2012, while calling out his opponents in the Republican presidential primary on their willingness to let the US default on its debt.

In an interview to be broadcast on ABC’s This Week on Sunday, Jake Tapper asked Huntsman about his shots at Tex. Gov. Rick Perry’s contention that evolution is “a theory that’s out there,” but not a sure thing, nor is the idea of climate change. Last week Huntsman tweeted his take, “To be clear. I believe in evolution and trust scientists on global warming. Call me crazy.”

Huntsman went on to describe what he sees as the long term political downside to questioning science:

When we take a position that isn’t willing to embrace evolution, when we take a position that basically runs counter to what 98 of 100 climate scientists have said, what the National Academy of Science – Sciences has said about what is causing climate change and man’s contribution to it, I think we find ourselves on the wrong side of science, and, therefore, in a losing position….I can’t remember a time in our history where we actually were willing to shun science and become a – a party that – that was antithetical to science. I’m not sure that’s good for our future and it’s not a winning formula.

On the subject of the GOP presidential field’s indifference toward the prospect of default and their ability to handle the economy, he painted all with a broad brush:

Well, I wouldn’t necessarily trust any of my opponents right now, who were on a recent debate stage with me, when every single one of them would have allowed this country to default. You can imagine, even given the uncertainty of the marketplace the last several days and even the last couple of weeks, if we had defaulted the first time in the history of the greatest country that ever was, being 25 percent of the world’s GDP and having the largest financial services sector in this world by a long shot, if we had defaulted, Jake, this marketplace would be in absolute turmoil. And people who are already losing enough as it is on their 401(k)s and retirement programs and home valuations, it would have been catastrophic.

Note – this article was written by Kyle Leighton for Talking Points Memo and appears here via a content sharing agreement.