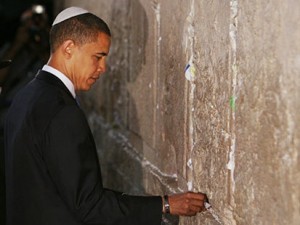 As we reported earlier, the conservative group Emergency Committee for Israel, co-founded by Weekly Standard editor Bill Kristol released an ad criticizing President Obama for not visiting Israel during his presidency, although he did visit as a candidate in 2008. If presidential visits to Israel are the new yardsticks for a quality POTUS, perhaps Kristol’s group (and Politico, who reported on the ad rather uncritically) should see how Obama measures up to leading Republican presidents like Ronald Reagan and the Georges Bush.

President George W. Bush, however, didn’t get around to visiting Israel until January of 2008, near the end of his second term, visiting again in May of that year. His father, President George H.W. Bush, was an even less frequent visitor, traveling to Israel as President in February of Never.

Surely President Ronald Reagan, the patron saint of Republicans, the exemplification of all that is good and conservative, was known to get his Israel on, right?

In fact, when George W. Bush went to Israel in January of ’08, he was the first Republican president to do so since Richard Nixon, who went in June of 1974 (only after he had already been to Iran).

The value of frequent flyer miles to Israel is debatable, but if anyone should be keeping quiet about such a blunt metric, it’s Republicans, who apparently have real trouble counting. And Googling.