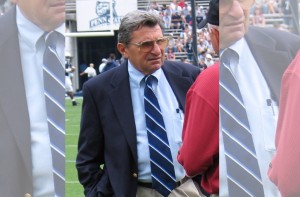 Back in May when stories first surfaced about Joe Paterno supposedly being told about, and ignoring, horrendous allegations against Jerry Sandusky all the way back in the 1970s, I wrote for LawNewz that those headlines were outrageous on every level. Today, as the news media once again picks through the carcass of completely absurd and unsubstantiated claims against a dead man, which were rewarded with huge financial settlements with no scrutiny, I am surer than ever that I was right.

And anyone who cares about the truth and media ethics should be enraged about what is happening today.

To review, once Penn State fired Joe Paterno, a star prosecution witness against Sandusky, before any of the actual facts of this case (including even the year of the primary episode) were known, Penn State University made it clear, way before there was ever a trial, that they would be paying out up to $100 million dollars to Sandusky’s accusers.

As a result, 32 accusers have been paid an average of $3 million each for their stories of abuse. This was done without any sort of trial, investigation, or even cross-examination. If the accuser had been part of Sandusky’s Second Mile charity, was under 30 years old (the statute of limitations in Pennsylvania for such claims), and the accusation involved Penn State in any way, they were paid with almost literally no questions asked. The agreements with the claimants (see below) make it very clear that Penn State was not verifying the accuracy of their accusations and Penn State’s president has recently, against his self-interest, admitted that the university did not adequately vet these accusations.

As part of the process for Penn State to get reimbursed for these massive settlements by their insurance company, a judge very briefly mentioned some of the accusations indicate that Penn State either knew, or could have known, about the Sandusky allegations all the way back in the 1970s. This is all it took for the news media to prematurely take a molehill of “evidence” and turn it a mountain of damning headlines against the late Joe Paterno, all for easy ratings and to substantiate their prior rush to judgement, which likely facilitated his death.

The media, sensing the chance to replenish their poisonous feast, petitioned to have these settlement documents unsealed (which were never intended to be made public, thus the reason for the settlements in the first place). That request was granted, however the identities of the accusers have been redacted, which of course makes it very difficult to evaluate their credibility (if you don’t even know who the person is making the claim, how do you even know if they were living in the area at the time of the allegation?).

Today those documents are the source of numerous very declarative headlines, from allegedly reputable news sources, that Joe Paterno, as well as some of his assistants, “knew” about Sandusky and chose to do nothing about it in the name of protecting their football program. At the center of these stories is the allegation that in 1976, after being abused at a Penn State football camp, the accuser told Paterno about it and the Hall of Fame coach with a sterling reputation told him to go away.

This accusation (where Sandusky abuses a kid at a camp he doesn’t even run and then Paterno not only keeps him on staff but helps him start a major kid’s charity the very next year?!) is simply not remotely plausible in any way and is far from proven.

You know who agrees with me? That very accuser’s own lawyer, Michael Boni!

Back in May, Boni (who was not yet known as the 1976 accuser’s attorney because it was not clear then that the documents would be unsealed) said:

“The headlines of these stories is Paterno knew of Sandusky’s molestation in the ’70s, ’76 or ’77. I’m unaware of direct, irrefutable evidence that that’s the case. Believe me, I’m the last person to defend the guy, but I am the first person to believe in our justice system. And I think you need more than anecdotal evidence or speculative evidence.”

Those are the words of the accuser’s own attorney! And yet not one media outlet has even bothered to mention this remarkable statement or abide by his rather obvious implicit admonition that there at least be some caution in reporting anonymous allegations about a dead man from 40 years ago when millions of dollars are being paid out for story.

Paterno isn’t the only dead man being implicated unfairly in this fiasco. One accuser’s story (I am very credibly told this was Matt Sandusky) involved former Penn State assistants John Sarra and Kevin O’Dea witnessing abuse in 1988. Sarra is now conveniently no longer with us. O’Dea didn’t even come to Penn State until at least 1990. In 1988 he was at the University of Virginia. And yet the news media will almost certainly ignore this factoid which should instead make them question this entire nonsensical narrative.

No other former Penn State assistant has remotely substantiated the claims they were supposedly involved in and I am told very credibly that current UCLA assistant Tom Bradley will be strongly denying the allegations alleged to have involved him. (UPDATE: both Bradley and assistant coach Greg Schiano have both since issued denials.)

What is most outrageous about how the media is once again gleefully and blindly rushing to a judgment which fits their agenda is that there is a very simple and obvious explanation for what REALLY happened here.

There is a very good reason for why these settlements have produced allegations against Penn State employees which suddenly stop at the end of the 1980s. It is just basic math.

As I previously stated, the statute of limitations for suing for allegations of child sex abuse in Pennsylvania is 30 years old. The accepted “limit” for being a Sandusky accuser (thanks to the trial accusations) is 15 years old. This means that anyone who came forward after Paterno’s firing to make a claim against Penn State realistically had to have been abused before the mid-90s. Otherwise, they and their lawyer had a big problem.

This was not a challenge which could not be overcome, however. If you had a claim which gave Penn State an extra incentive to make your story go away, they were willing to pay those allegations outside of the statute of limitations. For instance, Matt Sandusky, Jerry’s adopted son, was one of those who, despite not having a legally legitimate claim, was paid because of his “celebrity” status and ability to get huge media coverage for his story.

For accusers without that option, they needed a Penn State “hook” for them to be eligible for the money. And for the really old accusers (who claim they were abused before Sandusky’s charity started in 1977 and therefore had “two strikes” against them in the settlement process) there was no more powerful weapon than to claim that you told Joe Paterno. This is why to the two oldest (and after an even cursory examination, least credible) claims which were paid, directly involve him.

In short, these stories may be fairytales specifically crafted to get free money, which they got.

I am sure that many people are very skeptical that what I am saying here is anything more than a theory I have to try to discredit what appears, to the untrained eye, to be a tsunami of evidence that I am wrong about this case. I can assure you that this is not remotely the truth.

For the first time publicly, I can reveal that my knowledge of the bogus Penn State settlement process is both extensive and definitive. There is a man who has gone through the settlement process as a purposely fake accuser because he did not believe that the Sandusky allegations were true or that Penn State’s settlement process was remotely credible. He wanted to prove that was the case. During that process it became clear that anything he said would be both believed and manipulated into conforming to what Penn State needed to pay out a claim under the “rules” which I have outlined here.

This is all on tape and with documentation. Hopefully, someday this story can be fully revealed so as to prove what an outrageous farce this entire situation has become.

I have seen a ton of “Media Malpractice” in my career, but there is nothing I have endured which compares to what we are witnessing today with the further destruction of a revered dead man with horrendous allegations which are not only not remotely proven, they simply are not true. 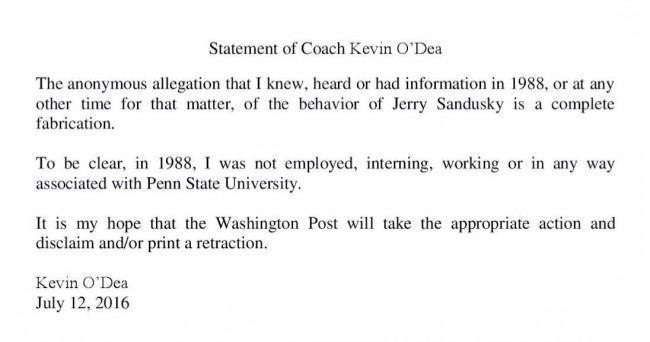 —
John Ziegler is a nationally-syndicated radio talk show host and documentary filmmaker. You can follow him on Twitter at @ZigManFreud.

Correction: An earlier post mixed up up two former Penn State assistants. The post has been corrected.