If the ‘Conservative’ Media Won’t Stand Up to Trump Can They at Least Do So With Drudge?
Opinion

If the ‘Conservative’ Media Won’t Stand Up to Trump Can They at Least Do So With Drudge? 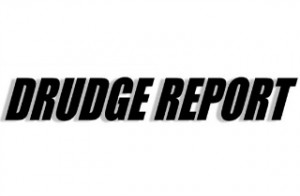 Did you hear the big story from last night’s NBC “town hall” with the major presidential candidates?!

No, not that made-up stuff about Donald Trump praising Vladimir Putin and lying about his position on various military conflicts. I’m talking about the REALLY important bombshell!

It turns out Hillary Clinton was wearing an “inductive earpiece” so that she could be prompted to recite her lines in case she forgot them. This was obviously because she is in such bad health from her previous brain injury that she is barely able to function as a normal human being.

We know this is true because an actor tweeted about it and an unknown conspiracy website wrote about it with an unnamed source. In case that isn’t enough for you to believe it (you must be a brainwashed member of the liberal elite or part of the New World Order!), we know it is true because the most powerful “conservative” force in the Internet, the Drudge Report, made this blockbuster revelation its lead story today. Even Fox News then picked it up. Donald Trump’s son then removed all doubt about the story on Twitter, where the hashtag #HillarysEarPiece has been trending all day.

There is even documentary proof! You see seven years ago Hillary was asked in an email if she had her “earpiece”! The email was from Huma Abedin so we already KNOW that it HAD to be nefarious. It’s all so obvious!

As a conservative, if you doubt any of this then you are clearly a shill for Hillary Clinton and probably helped her get away with at least one of the many murders that she has committed (just ask Sean Hannity’s new pal Julian Assange!).

Or, possibly, you are part of the seemingly shrinking group of remotely rational people who have not completely lost their damn minds over this insane election and realize that the “earpiece” was just a weird light reflection.

Either, or. It’s a tough call.

Please… someone… make… this… nightmare… END!

Make no mistake, this episode is a catastrophic embarrassment to not just to the “conservative” media, but to humanity itself. It is also all Matt Drudge’s fault.

I have written sooner and more extensively than anyone about how Drudge going completely into the tank for Trump was the most important domino in the “perfect storm” which led to him stealing the GOP nomination. However, even I am stunned to the pathetic lengths to which Drudge has now gone to achieve whatever his goals are (A Trump presidency? Trump TV? Pure chaos? Easy traffic? An intervention by a therapist?). The once mighty Drudge Report has now lost so much credibility that I am beginning to doubt whether Bill Clinton ever really had “sexual relations with that woman, Miss Lewinsky.”

It wasn’t so long ago that Drudge becoming a fully-owned subsidiary of the presidential campaign of a liberal conman and a common depository for the most insane theories of “9/11 Truther” conspiracy nut-jobs like Alex Jones would have been more unthinkable than even Trump himself becoming president. Although, in retrospect, the seeds for this transformation into lunacy were planted years ago.

My experience with Matt Drudge was a fill-in for his old national Sunday evening radio show (a time slot which, not coincidentally, my current program occupies) and as a then close friend to the late Andrew Breitbart back when he was effectively running the Drudge Report.

I learned a lot from Breitbart about how it is that the Drudge Report operates, or at least used to before the recent “conspiracy” take over (people would be shocked to know that he and Matt almost never spoke and rarely communicated). Andrew saw the Drudge Report as about the only viable option to inject a “conservative” news narrative into the bloodstream of the mainstream news media. He was acutely aware that you could not achieve such an objective with the use of sources which were overtly “conservative,” or which clearly lacked credibility.

Breitbart basically set up a system where he had several “go to” reporters at news sites which were at least somewhat respectable (Mike Allen, then of Politico, was a favorite). He would feed them stories from shakier sources and, with a “wink and a nod,” let them know that if they did the story, thus cleansing it of “conservative stench,” it would be linked on Drudge. This created more than enough incentive for stories otherwise ignored by the liberal mainstream media to make their way up the food chain in a way that they otherwise never would have.

In short, it was a brilliant way to leverage the traffic power of the Drudge Report to force the liberal media to stop systematically ignoring “conservative” narratives (the financial/career bias in the news media is far stronger than the liberal variety, something Hillary Clinton seems to be finding out, yet again). While Andrew certainly knew how to harness this clout for his own personal benefit, Breitbart also never lost sight of that ultimate political goal, nor would he have threatened the long-term health of the Golden Goose by constantly linking, in prominent ways, to blatantly bat-shit crazy conspiracy websites like InfoWars.

The first sign of real trouble to the overall political purpose of the Drudge Report (other than to obviously make boatloads of money for its founder based on the greatest business model in Internet history) came during the 2008 primaries. This was when both Breitbart and I became completely convinced that Matt Drudge was taking a dive on Barack Obama, as Drudge, out of the blue, routinely blocked Breitbart from posting negative stories about him, specifically with regard to the “Reverend Wright” controversy. I have been derided in conservative circles for making this accusation, but after what Drudge has so clearly done for Trump, any sane person (meaning non-Trump fanatics) who looks objectively at the evidence will see that I am absolutely right.

The negative impacts of the “conservative” media selling their souls to Trump will likely be profound, especially if he loses by a large margin. However, the long-term impact of losing the Drudge Report as not only a force for combating the liberal media (which it has proven itself to no longer be), but also as a remotely credible news source, may have even more profound implications.

After this election is finally, mercifully, over, mainstream sources will no longer see a prominent Drudge headline as something they can’t ignore. After all, Drudge accused Hillary of wearing an earpiece during a live TV interview and, through Julian Assange, effectively claimed she murdered a DNC staffer over her emails. Not just in a single link, but as the site’s main headline for an extended period of time.

I can somewhat understand how “conservative” media stars are afraid to harm their careers by properly attacking Donald Trump. At least in that realm there is the principle of party loyalty and, of course, “Hillary is the devil” and must be defeated at ALL costs. But the complete lack of willingness for anyone in the “conservative” media to stand up to the cancerous blight on our cause that the Drudge Report has become is nothing but craven career cowardice.

The fear among media types to cross Drudge and forever lose access to his remarkable traffic is, especially for conservatives who have nowhere else to go, completely debilitating. Such a devastating personal loss would be far too much for conservatives to endure for our cause. Of course, in this depressing election cycle, we have learned for sure that ANY semblance of sacrifice for the cause by those in the media claiming to be conservative is simply far too much to ask.

John Ziegler is a nationally-syndicated radio talk show host and documentary filmmaker. You can follow him on Twitter at @ZigManFreud or email him at [email protected]