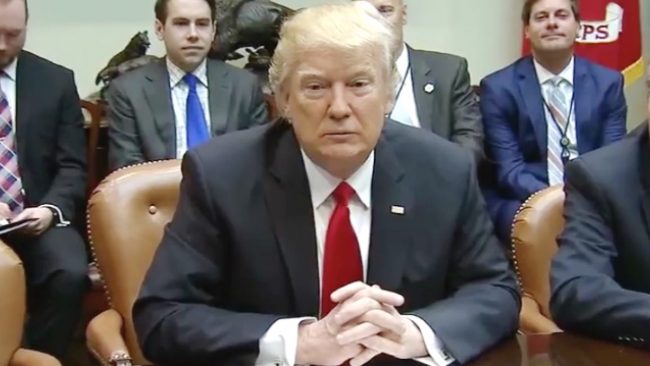 As President Trump’s hope for a successful launch of his quest to “Make America Great Again” appears to be dimming with each passing day that it is dominated more by scandal than accomplishment, he has intensified his war with the news media. As I and many others have often noted, this is all clearly part of a strategy to protect his cult-like base of support from learning that their emperor has no clothes. When the facts against you are damning, the only option is to discredit those who are communicating them, and no one has ever done this with more audacity (or success) than Donald Trump.

As a life-long conservative who has plenty of battle scars from very real skirmishes with the liberally-biased and truth-challenged news media, Trump’s attacks on them are, for me, by far the most conflicting and ultimately demoralizing element of his presidency. Normally, the enemy of your enemy is your friend, but I see Trump as the very unworthy beneficiary of the righteous suffering of others.

As I have said before, I feel very much like a poor black person in South Los Angeles must have felt when O.J. Simpson used blatantly absurd claims of LAPD racism to get away with murdering two people. Similarly, I have seen Trump masterfully manipulate conservatives who have been trained for decades to rightfully distrust the news media and use that sentiment for his own selfish purposes, all at the long-term cost of their own cause.

On Friday, with the world still buzzing about his certainly surreal and seemingly insane press conference from the day before, Trump took to Twitter to somehow, if even possible, further escalate his battle with the fourth estate with this tweet (which was his second effort after deleting his first, apparently so he could add more media outlets to it):

The FAKE NEWS media (failing @nytimes, @NBCNews, @ABC, @CBS, @CNN) is not my enemy, it is the enemy of the American People!

So now the major news media (excluding those outlets favorable to him like Fox News Channel, which are now part of the state-approved media) are the “enemy of the American people.” Obviously this was a political effort to try to make his base of support feel as if they are part of this fight. And that when he takes on the media he is doing it for them and not, as it may appear to someone paying attention to what he actually says, just him (although I doubt too many of those who bought red “MAGA” hats really care much about his favorite attack topics, like the size of his election victory or inauguration crowd).

It should go without saying that Trump’s statement was grossly inappropriate for a man holding the highest office in the land, which required him to take an oath to uphold the Constitution and thus the First Amendment. However, we are now living in an age where “inappropriateness” alone no longer moves our badly-stunted outrage meter, or even really matters at all.

I have great personal disdain for the mainstream news media. I think they have allowed journalism and our culture’s value of the truth to die in an evil exchange for their own fame and fortune. But even I don’t think they are the “enemy of the American people,” at least not in their intent. The vast majority of them just want to be able to keep their cushy jobs without having to take too many risks or work too hard.

All that said, there are indeed times when Trump’s analysis of the news media is EFFECTIVELY true. Ironically, I can’t think of a better example of this than their treatment of Trump himself.

Can we please not forget that NONE of what we are currently facing ever comes close to happening if the news media hadn’t done at least the following things:

What is most interesting to me about this “war” between Trump and the news media is that they both need each other very badly. Without the media to kick around, Trump would have to focus his ire on Democrats, which would be difficult both because they are in the minority, and in reality he is one of them. Similarly, the news media on the one hand is horrified by Trump, but on the other they love him because he provides two of the elements they crave most: easy content and big audiences.

In a sense, Trump is like a dirt-bag drug dealer giving the news media their fix or a rich boyfriend who abuses his partner. They despise him for what he is doing, but they simply can’t quit him.

I have a theory that one of the reasons Trump understands the news media so very well (and thus is able to manipulate them like no one else in political history) is that he is so much like the average modern reporter. He is not very bright with a short attention span, likes a good/easy narrative, has no interest in details, puts little value on morals, and just wants to be rich and famous.

Part of this theory is that one of the reasons that Trump is so positive that the media is dumb and corrupt is that he is amazed at what they have allowed him to get away with through the years. The fact that they have now helped him become President of the United States, all while pretending to oppose him (I’m still convinced much of the news media was conflicted because they knew how awesome his presidency would be for them personally) has probably solidified in his mind forever that he is right about the media.

Groucho Marx once famously said that he never wanted to be a member of a club that would let him in. Likewise, it’s very possible that Trump will never respect the news media for the very reason that they allowed him to dupe them until it was too late. And it wasn’t even that difficult.