Is It OK for Fire Departments to Use Instagram-Style Filters on Accident Scenes? 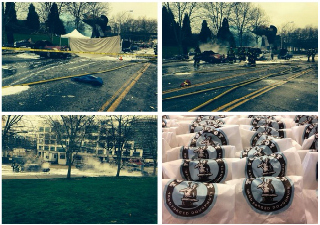 The news of the helicopter crash in Seattle yesterday was a terrible tragedy, that much goes without saying. The helicopter, which had taken off from the KOMO-TV station left two dead in the accident, including the pilot Gary Pfitzner, and Bill Strothman, a KOMO photographer. Naturally, when accidents like this happen, news teams, much like this very one, are among the first on the scene providing us with images of the wreckage.

It’s a curious business, disaster reporting. On the one hand it satisfies the public’s interest in newsworthy events happening in our cities, but it also comes with a morbid angle as well. Most of us want to see images of destruction the same way we slow down on the highway as we’re passing by a wreck. Do we really need to see the specificity of the carnage in detail? One could make a strong case either way.

Aside from news teams, local emergency response and fire units are, of course, on hand as well. But whereas in the past they might have had public relations teams on hand documenting the scene with photos that might end up in stories that would be published the next day in newspapers, or shown on television that night, the emergence of social media as a tool for fire and police departments has given us a closer to real time glimpse into such accidents as they occur.

Naturally, as with most things related to social media, we still haven’t all quite agreed on the best practices when it comes to utilizing it, and departments around the country are slowly figuring out what rules work best for them. At many, as in rules handed down in Baltimore a little while back, firefighters are prohibited from using personal phones at fire scenes, or from taking pictures while on the job.

Instead, at big departments like in Seattle, or New York, the photos are taken by public information officers. But even the more media savvy members of the departments, like any of us in any field, really, can be stymied by what is the best use of social media, particularly when you add in the chaos of an ongoing fire or accident scene.

A couple of recent photos taken by departments on the scene of an accident and shared on their Twitter feeds brought up what I think is an interesting question about how these photos can, and should be shared.

Consider this one from the helicopter accident yesterday:

Medics transporting an approx 37 yo male to HMC in critical condition self extricated from car pic.twitter.com/hhVAX0qmbs

Notice something strange? The photo, along with two others form the scene, seem to have been run through an Instagram-style filter.

As one snarky critic on Twitter quickly pointed out, “that’s really hip, seattle fire department put a cool instagram filter on their news report of two dead on arrivals.”

Margarita Noriega of Market Place from APM, whose tweet brought the photo to my attention, also posted her surprise that a fire department would seem to be filtering a photo of scene like this:

“First @FDNY now @SeattleFire using what looks like photo filters on emergency response Twitter accounts,” she wrote. “@FDNY, for the record, denied it.”

In fact last week when the FDNY tweeted out a series of photos, including this one below. There was a lot more shocked disbelief from observers on Twitter.

Now: Photo of #Manhattan collapse. #FDNY has 39 units and 168 members responding. The scene is developing. pic.twitter.com/zWhTmi9Dsm

“Silly of me to be annoyed that the @FDNY put a filter on their twitpic of the collapsed building?” asked one person. “Am i the only person that is gonna call out the egregious filter use by FDNY on their 1st response photo of the explosion in harlem?” wrote another.

The FDNY denied the claims on Twitter, writing, “The smoke is what makes the photo look like that. No filter used.”

Perhaps, although a glance through most of the photos posted on their account show plenty of fire scenes that don’t appear filtered with a sepia-tinted, nostalgia-evoking tone. 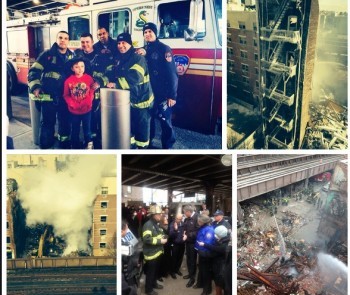 There aren’t many fire departments whose do, actually. I spent a couple hours going through the Twitter feeds of a couple dozen fire departments from the largest cities in the country, and there were very few, if any that looked like this, whether it was San Diego, Houston, Denver, or Milwaukee. Here, for example, is what smoke does to a photo in Phoenix.

Maybe it’s just in hip cities like New York and Seattle, you might think. Austin’s plays it pretty straight, however. And while Portland has plenty of vintage-looking photos posted, they’re literally of vintage fires.

I spoke with Jim Long, the director of public information for the FDNY, and he denied that the department had filtered the photos in question, or that they ever do so. Long is the one who took the photo of the collapse that appeared to be filtered, he said. It’s usually members of the press office, or of the photo unit who posts the photos to the Twitter feed, he explained. Generally they’re taken with their personal iPhones. But, he stressed, his photo “was not doctored or filtered. There were no special programs used, no Instagram. I just took the photo with my iPhone and forwarded it to the social media person. There were no enhancements to adjust the quality.”

Are they any rules that would specifically prohibit such a thing in the department’s social media policies?

“There’s nothing specific to that,” he said. “But we operate in a very professional, forthcoming fashion, where the photos that we take are what they are. The real article.”

In Seattle, the Fire Department’s public information office Kyle Moore, however, said that the photos of the crash were filtered, but that it was an unforeseen mixup. 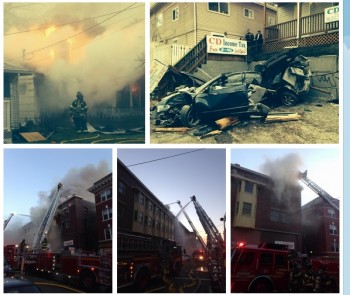 “I took the photos of the scene with my iPhone,” he told me. “During the chaos I didn’t realize that the filter was on the pictures. The Seattle Police Communications Team alerted me to the filter issue and I changed it on the phone.

It’s a mistake he doesn’t intend to make again, he said. “I am going to be more conscious at emergency scenes to make sure the IPhone is in the proper filter setting.”

It’s fair to wonder whether or not this is even that big of a mistake in the first place. There’s certainly something a little strange about the idea of using Instagram-style filters on photos of accidents and fires, but it’s not something that is necessarily explicitly outrageous on its face, as many of my media colleagues who I asked about this story seemed to agree. In photojournalism this sort of thing is certainly not allowed, but, as we often see on the internet, all of us thrown together as we have been by social media into hard to define job roles, we still haven’t all quite figured out the best ways to handle every situation when it comes to sharing media.

And where would we draw the line on editing photos from a police department or a fire department anyway? Certainly some techniques, like cropping, and framing, and setting up a composition are allowed, even encouraged, right? One wants to see a clearly composed image of the scene in question, otherwise what’s the point? And a filter is just the press of a button, after all, one we all take for granted every day.

Still, I think drawing the line at filtering accident scene photos is probably a fair compromise. Especially since we’re all so accustomed to the idea of filters being used to make our lives look more romantic, or softened, or glamorous. There’s nothing glamorous about a building collapse, or a helicopter crash, no matter how much you soften the edges.