Is It Still News That Al-Qaeda Wants To Attack The U.S. With WMDs?

Is It Still News That Al-Qaeda Wants To Attack The U.S. With WMDs? 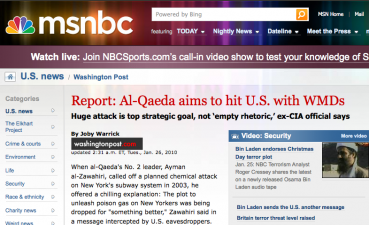 The Washington Post and MSNBC.com are running identical stories about a new report from a former CIA member that calls al-Qaeda leaders “determined and patient, willing to wait for years to acquire the kind of weapons that could inflict widespread casualties.” The terrorists are “pursuing parallel paths to acquiring weapons and forging alliances with groups that can offer resources and expertise.” Is this news?

Because it seems like these are things we already know to be true, evidenced through attacks both executed and thwarted. Here is writer Joby Warrick’s opening two paragraphs, emphasis added:

When al-Qaeda’s No. 2 leader, Ayman al-Zawahiri, called off a planned chemical attack on New York’s subway system in 2003, he offered a chilling explanation: The plot to unleash poison gas on New Yorkers was being dropped for “something better,” Zawahiri said in a message intercepted by U.S. eavesdroppers.

The meaning of Zawahiri’s cryptic threat remains unclear more than six years later, but a new report warns that al-Qaeda has not abandoned its goal of attacking the United States with a chemical, biological or even nuclear weapon.

They are interested in large scale attacks, the reports also says. Are you scared yet?

The dominance of “official sources” or “experts” in newspaper reporting has been consistently criticized for decades (Noam Chomsky‘s Manufacturing Consent comes to mind first) and yet, in practice as the only source for front page news, it’s especially egregious — serving only to conjure fear by beefing up conventional wisdom with a CIA-affiliated report.

Glenn Greenwald, in an update to his post today on Obama’s spending freeze, skewered Warrick’s article and the CIA report with a hearty dose of sarcasm and cynical anger:

Apparently, it’s breaking news — meriting screaming red-alert headlines — that Al Qaeda would like to (“aims to”) acquire WMDs and use them against the U.S. But we should all try to remain a little calm, at least. I’m sure if we just buy some more fighter jets, create some better underground bombs, invade a few more Muslim countries, keep more Muslims imprisoned forever with no charges, give the Pentagon, the CIA and their private contractors a lot more unaccounted-for cash and stay out of their way, expand our domestic spying networks even further through private sector telecom contracts, pour tens of billions of dollars more into the coffers of our Middle East client states, and kill a few more civilians with drones, this problem will be handled. It’s just a matter of making sure we bulk up our military budget — and Look Forward, not Backward to what was done in the past — and we’ll be able to Stay Safe from this Terrorist-WMD menace.

Obviously, threats to the United States’ security are important, and should be known by the newspaper reading public. But let us not forget that the ultimate goal of terrorism is to instill an overwhelming sense of fear and anxiety in an enemy. Why would a news organization aid this process while adding no legitimately new information?