Is Obama Afraid Of The White House Press Corps?
video

Is Obama Afraid Of The White House Press Corps? 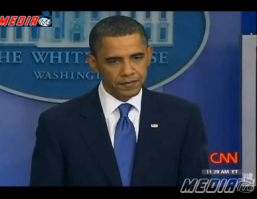 Apparently, the surprise daytime visit President Obama paid to the White House briefing room last week was not nearly enough to quell complaints that by not giving a full presser to the White House press corps. Obama is trying to do an end run around the 4th Estate.

Howie Kurtz, whose column last week about the President’s seven month presser dry spell may have motivated his appearance on Tuesday, redressed the matter on Reliable Sources Sunday (because when there’s even the smallest chance you can take credit for the President’s behavior, who can blame you for exploiting it). The President may be doing a lot of interviews says Kurtz, but are they the equivalent of what he would face one on one in the briefing room? Says the San Francisco Chronicle’s Debra Saunders: “Clearly, they’re shielding him. Clearly, they’re afraid of getting the kind of questions that Lynn [Sweet] might ask, and they’re trying to cherry-pick where the interviews come from.”

KURTZ: Well, Debra Saunders, White House officials tell me that the president has been interviewed just in recent weeks by Diane Sawyer, by Katie Couric, by George Stephanopoulos. He’s taking questions on YouTube, average people sending in their videotapes. And they contend that these kinds of questions are just as tough as those you get from the White House Press Corps.

SAUNDERS: Writing for the “San Francisco Chronicle,” there are a lot of national media people who will come in, and they’ll get interviews with Governor Schwarzenegger, Meg Whitman, who’s a Republican candidate for governor, and they like to give those interviews with the national people. They don’t like to give interviews with the locals, because we’re going to really put their feet to the fire on local issues. The White House is playing the same game in a different way. They don’t want to have the press conferences, they want to cherry-pick who they talk to, what they talk about. So they’re picking people for those one-on-one interviews. They don’t want to mix it up anymore.

The obvious and immediaite problem with this argument is that Obama has arguably done more press than any president in history. So, either the White House is the most calculating media savvy organization on the planet, or, the White House press corps. are a group of self-important spoiled brats. It’s probably a bit of both, though I’m leaning more to the former than the latter. Also, Saunders’ entire argument is predicated on the fact that the press corp. asks the sort of hard questions that no one else does, and get answers, which I’m not sure is necessarily true. Though, since the President hasn’t had a full presser in seven months it’s hard to know for sure. One thing is for sure. Now that Robert Gibbs is on Twitter (and I’m not yet convinced this was the best decision the White House ever made) the administration just has one more way to reach around the press corps. Video of the Reliable Sources segment below.