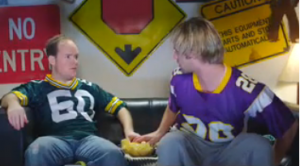 It was an irresistible story.  A gay-hookup site called ManCrunch submitted an ad to CBS for inclusion during the Super Bowl.  The company leaks to the media that they expect to be turned down because the ad includes two men kissing and CBS instantly became the villain in the annual ritual of Super Bowl ad drama.

Less than a week later, the tide has slowly begun to turn and attention is now focused on the people behind ManCrunch and whether the media that focused on the story and the gay community that helped fan the outrage have been played by people manufacturing a controversy to increase attention for the website and who aren’t all that supportive of gays?

When news of the rejected ad first surfaced, people quickly jumped on the anti-CBS bandwagon and somehow saw ManCrunch as the latest bottle thrown at the Stonewall rebellion.  Amid the Focus on the Family ad controversy, CBS rejecting an ad featuring two guys “kissing” was an undeniable symbol of everything-that-is-wrong with how CBS has handled Super Bowl ads.

But is a company that wants to cater to men on the “down low” and produces an ad that features a “kiss” and set-up you’d expect on Spike TV or a Jackass movie really  worthy of martyr status?  Is it possible that the real homophobic villains in this annual morality play are ManCrunch and their cynical exploitation of the media, the gay community and those sympathetic towards gay people?

In an email, ManCrunch spokeswoman Elissa Butcher told Mediaite that the allegations that the ad was a hoax to get attention was “completely false” and she said that the networks ad denial represented a serious harm to the gay community.

CBS’ rejection has now opened the door to other networks potentially rejecting our commercial.  From a cultural perspective that will set the gay movement back decades and from a business standpoint that will really hinder our company’s efforts to advertise in the US.  Our service doesn’t belong in the late night time slots reserved for 1-900 ads.  We should be allowed to advertise anywhere Match and eHarmony are allowed to.

Manufacturing a controversy by submitting a controversial ad for the Super Bowl isn’t new, but the willingness of the media to play along year-after-year appears to be never ending. The annual kabuki dance between publicity seekers, the networks, and the media means the networks are blamed for not being open-minded while no one questions the cynical motives of potential advertisers

While many people who originally saw the ad on YouTube questioned the production quality of the ad, there was very little information about the Toronto-based company who said they were launching a new hook-up site for men. Some people who talked to MediaCrunch spokespeople realized they are the same people who repped AshleyMadison.com, the service for married men and the single women who like them.  According to Butcher, both sites are owned by the holding company Avid Life Media and ManCrunch was created because the gay community lacked “an online dating site that promoted lasting relationships” as opposed to being “sex-driven.”

As Alex Blaze at Bilerico Project points out, the two websites have almost identical terms-of-service statements, specifically providing “an interactive way for like minded users to explore whether they wish to meet each other, chat with each other and/or explore extra-marital relationships.” The small print at ManCrunch says the service is for men who want to “open up about the down low.” The “down low” is code for men who date and marry women, but also have sex with men.

>>>Real or not? Skeptics from across the blogosphere wonder what’s really going on here.>>>>