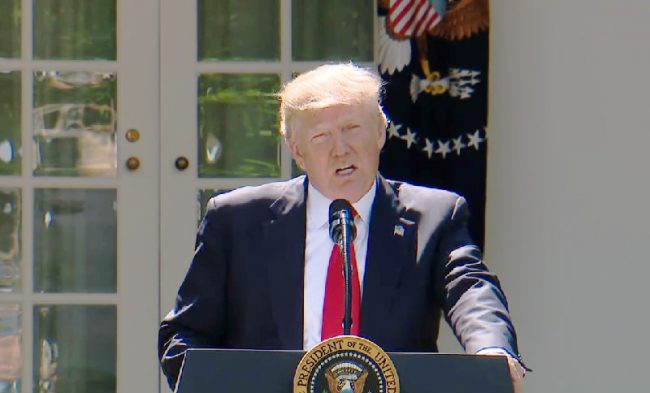 After this afternoon’s announcement from President Donald Trump that the United States would be exiting the Paris Climate Agreement, confirming reports earlier this week that he’d decided on exiting the international climate accord, Democratic members of Congress immediately took to Twitter to express their outrage and disappointment.

With Trump exclaiming that “we’re getting out,” senators and representatives fired off their angry messages. Sen. Kamala Harris (D-CA) noted that it was “indefensible”:

Leaving the Paris Agreement is indefensible. It's bad for our kids & grandkids, for economic development & for our position in the world.

.@realDonaldTrump's removal from the #ParisAgreement is morally irresponsible. We must #ActOnClimate. pic.twitter.com/FvyJd0zD5s

The #Paris agreement was the result of 25 yrs of hard work over 4 previous presidential admins. A withdrawal is a mistake.

Rep. Salud Carbajal (D-CA) said it was a “bad deal for the health of our children”:

Withdrawal from #ParisAgreement is a bad deal for the health of our children. Today, the President has threatened the future of our planet.

Sen. Patty Murray (D-WA) felt the exit was “especially cruel” to her homestate:

It's especially cruel for places like WA, where ocean acidification, disappearing glaciers, & bigger wildfires are becoming the norm.

Sen. Dianne Feinstein (D-CA) let it be known that her state would continue to lead the fight to combat climate change:

If the White House won’t lead, California will step up. We will continue our fight against climate change. #ParisAgreement #ActOnClimate

Sen. Maria Cantwell (D-WA) said it was a “sad day for America”:

It's a sad day for America. Trump just quit the race to become the world's #cleanenergy superpower & diminished us in the eyes of our allies

And this is just a small collection of what Democrats in Washington had to say about the president pulling out of the climate deal.