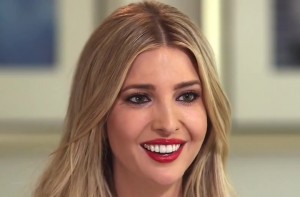 Following President Trump‘s announcement via Twitter last week that transgender people would no longer be welcome in the military, a White House official told The Daily Beast that despite their pretensions of being socially liberal activists in the White House, Ivanka Trump and Jared Kushner would no longer even attempt to intervene on the LGBT community’s behalf.

Now, Politico is reporting that Ivanka “desperately wants to lower expectations of what she can achieve in an administration where she views herself as one person on a large team.” This is despite how the same report says unlike other White House officials, “she still has access to the president whenever she desires it.”

R. Couri Hay, a publicist and friend of the Trump family, called it “unrealistic, unfair and cruel to expect her to change climate policy and pre-K and women’s issues in six months.” No one was expecting Ivanka to miraculously expand women’s rights and climate change policy, but it’s fair to say she’s been useless in stopping her father from severely rolling back on these issues.

Trump’s decision regarding trans people and the military drew wide outrage on both sides of the aisle, mostly because his justification for it — that trans people who are qualified and want to serve their country are some kind of economic burden — didn’t make much sense: Trump’s golfing trips to Mar-a-Lago so far, as well as military spending on Viagara, cost around three and five times more than health costs for trans people in the military. These health costs amount to roughly 0.1 percent of the total budget of the military. The following day, the Trump Justice Department would write arguments for fighting anti-LGBT discrimination.

The decision has become widely regarded as a move to appease the radically anti-LGBT members of Trump’s base, while Trump and Congressional Republicans stall in getting almost anything done.

In either case, according to the White House source, Ivanka and her husband have determined that their “political capital be spent elsewhere,” as one senior White House official characterized it. Considering how quiet Jared is, and how seldom his moments in the limelight are, this isn’t much of a surprise from him.

He’s not in the White House to fight for the vulnerable Americans his father-in-law seems determined to trample, and as frustrating and disappointing as this is, at the very least he’s never pretended to be anything but self-serving.

He’s never tried to portray himself as an activist.

But on the other hand, from the start, Ivanka has vocally identified herself as socially liberal, as a champion for working women whose “life’s work is to inspire and empower women in every aspect of their lives.” According to the latest report that she’s done even trying to fight for LGBT rights, it looks like the bloc of women she’s seeking to empower doesn’t include trans women.

On top of all of the White House tasks and titles she’s taken on since January despite being woefully under qualified, let’s also not forget that she took her father’s seat at the G-20 conference in Germany earlier this month — she wants to wear the “feminist activist” label like a set of designer clothing; she wants to be perceived as powerful, influential, as a fighter for progressive change in her father’s administration. But simultaneously, she’s wholly unwilling to do all the actual, nitty gritty work this entails.

She wants people’s expectations of her abilities to lower, because she wants to wear the titles and labels that come with being a feminist activist, without doing any of the work that feminist activism entails.

Let’s not forget that even prior to this latest blow to trans people, and, via the Justice Department, blow to the LGBT community at large, isn’t even the first hard blow to a progressive cause Ivanka has claimed to be a champion of. The administration in January stripped funding from all global organizations who would offer young women education about birth control and abortion, which could blow up rates of unintended pregnancy and maternal mortality rates in countries like Nigeria.

Then, of course, there was Trump’s decision to yank the United States out of the Paris climate accords in June, and Trump signing off on legislation to allow the states to defund Planned Parenthood. It’s hard to see how Ivanka could be an advocate for women in the workplace, while being indifferent to whether or not they’ll be able to control their bodies and make their own reproductive decisions.

Marginalized people — women struggling for equality in the workplace, families with children struggling to find clean water to drink, and now, LGBT people who don’t want to be fired from their jobs or banned from the military because of their identities — aren’t mere props. The fact that Ivanka is decorating herself with claims of fighting for their protection and advancement while actually not doing any fighting, isn’t just selfish and deceitful — it’s dehumanizing for marginalized people who have real struggles and real needs.

Like many other women I’m sure, sometimes, some small part of me does want to give Ivanka the benefit of the doubt. Maybe she does actually have sympathy for the LGBT community, maybe she does want women to have equal opportunities, maybe she does want to fight climate change. But if any of that is true, she needs to pull her support from the Trump administration immediately. She can’t just disagree with her father quietly behind closed doors, then publicly remain his loyal servant.

Her public support for this administration equates to public support for discrimination against trans people, against funding for Planned Parenthood, against initiatives to protect future generations from the humanitarian disaster of global warming, because those are all stances the administration has publicly taken in words and in policy matters.

If she sincerely cares about any of these causes, it’s time for her to walk way from her father’s administration, maybe dive into nonprofits, real activism. But until then, as long as this administration has her stamp of approval, then no matter where she’s “spending her political capital,” her activism will always be a sham.