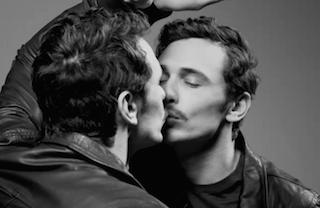 From 2008’s Milk through this year’s I Am Michael, James Franco’s apparent penchant for portraying gay characters have led some to speculate about his real-life sexual orientation. The actor has never hesitated to play on people’s expectations, and as we learned at his Comedy Central roast, his friends are always eager to joke about his sexuality.

Now, in a new feature for Four Two Nine magazine, “Straight James Franco” has conducted an interview with “Gay James Franco.” And while the full article is not yet online, Slate has printed a key excerpt in which he attempts to answer the question on everyone’s mind once and for all:

Straight James: Let’s get substantial: are you fucking gay or what?

Gay James: Well, I like to think that I’m gay in my art and straight in my life. Although, I’m also gay in my life up to the point of intercourse, and then you could say I’m straight. So I guess it depends on how you define gay. If it means whom you have sex with, I guess I’m straight. In the twenties and thirties, they used to define homosexuality by how you acted and not by whom you slept with. Sailors would fuck guys all the time, but as long as they behaved in masculine ways, they weren’t considered gay.