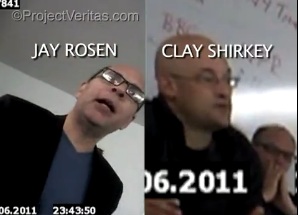 On Thursday, conservative undercover journalist James O’Keefe released the second installment of his “To Catch A Journalist” series, a takeoff on Dateline NBC’s “To Catch a Predator” sting aimed at discrediting mainstream journalists. His first swing, at Sam Stein, missed badly, and his second attempt, aimed at NYU Prof. Jay Rosen and Clay Shirky, brings the count to 2 and 0. Prof. Rosen, however, responded to O’Keefe’s attack with some revealing information about O’Keefe’s “investigation.”

The second “To Catch A Journalist” video, released yesterday, features hidden-cam clips of a classroom discussion by NYU journalism professor Jay Rosen and new media expert Clay Shirky, and although it contains lots of buzzy right-wing watchwords (like “The New York Times,” or “elites”), even out of context, the cumulative effect is of a fairly ordinary classroom discussion. It’s like an upskirt photo of someone in snowpants:

The video is so baffling, I emailed O’Keefe yesterday to find out what he thought he had “caught” Rosen and Shirky doing. He didn’t respond to that question, but from the video, it appears that he thinks the “We are the 1%” bite is the money quote. (I also pointed out that he had published Prof. Rosen’s phone number in the video, and it’s still there today. Nice.) Rosen explains the easy-to-infer context of that quote:

When Shirky says “we are the most elite…” and I follow it up with “we’re the one percent!” the discussion was about news consumption: journalism professors and students are at the extreme end in attention to news and willingness to pay for it. But you can feel O’Keefe salivating over those words as he splices them in. The implication he wants: we are your overlords!

In his response last night, Professor Rosen echoed that criticism, saying “there’s not much to say because it’s so incoherent, context-less and, frankly, boring. As Erik Wemple of the Washington Post put it: ‘Just a couple of professors prattling on in not-so-fascinating ways about media and politics.'”

What Rosen does reveal, though, is that when O’Keefe called him to get comments on some quotes from the class, Rosen was able to discern who taped the class: a prospective student, pseudonymously dubbed “Lucas,” who was a guest in the class that day. As always, it turns out the devil is in the details that didn’t make it into O’Keefe’s video:

“Lucas” had taped us, surreptitiously. Then he asked to meet with me. I didn’t know it at the time, but this was part of the sting. He said he wanted to become a political journalist: did I have any advice? I gave him several career paths he could follow. He asked me if being a politics major and a journalism minor would be a handicap. I said no. Then he let me in on something.

He said he had a tape of a Tea Party gathering in which some ugly and extreme (the implication was racist) things were said. He said it was gruesome stuff. He wanted to know how he could get it to the media. To the New York Times. I said the New York Times wouldn’t be interested in something like that, and that he might try to contact Max Blumenthal of the Nation. He asked if I had any other advice for him. I said find a niche and start a blog. I gave him the examples of Ezra Klein, Dave Weigel and Nate Silver to show him that it was possible. I was trying to inspire him! “Lucas” thanked me and left. He had a strange smile on his face.

It’s understandable that O’Keefe would want to justify the $80 he spent on a hidden cam, and the time invested by his operative, but not only is this product embarrassing, it also manages to undercut O’Keefe’s credibility even more than it already has been. In the second part of our interview, O’Keefe defended a similar omission, but this is magnitudes more egregious. The pity is, he probably would have gotten more play if he had made “Lib Journo Prof Does The Honest Thing” his lede.

I asked O’Keefe if he planned on releasing the footage of Prof. Rosen’s meeting with the Project Veritas operative, and why he hadn’t done so. His response was mystifying:

Please follow up with Jay Rosen about the contested info regarding Clay Shirky and The New York Times.  Jay Rosen, my trusted source, didn’t comment there.

I would talk to Professor Jay Rosen, my trusted source, to make sure he’s comfortable with the New York Times’s characterization of Shirky’s relationship with the NYT.

Not to get into the weeds, but in the video, O’Keefe identifies Shirky as someone who “has done consulting work for The New York Times,” which Shirky and the paper dispute. I responded, “Okay, but what about what I asked you? Are you going to release that footage?”

As yet, O’Keefe hasn’t responded.