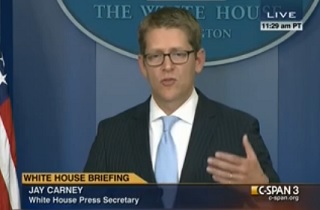 Around noon on Wednesday, news broke that President Obama will host congressional leaders, including House Speaker John Boehner (R-OH), for a meeting at the White House early this evening. A Boehner spokesman immediately cast the announcement as a reversal of the President’s pledge not to negotiate political concessions around the continuing budget resolution or the debt ceiling, but at the White House daily briefing, Press Secretary Jay Carney repeatedly assured reporters this was not the case.

Earlier today, The Washington Post reported that the President had summoned Congressional leaders to the White House for a meeting today, news which Speaker Boehner’s spokesman added a major expectation:

According to a White House official, the top four leaders of both parties from both houses were invited to meet with Obama at 5:30 p.m. Eastern time. The president will urge the House to pass a “clean” continuing resolution — without what Obama has called “ideological demands” such as riders aimed at undermining his signature health-care law — so that the government can reopen.

…“We’re pleased the president finally recognizes that his refusal to negotiate is indefensible,” (Boehner spokesman Brendan Buck) said in a statement. “It’s unclear why we’d be having this meeting if it’s not meant to be a start to serious talks between the two parties.” Buck confirmed that Boehner would attend.

At Wednesday’s White House daily briefing, however, Press Secretary Jay Carney repeatedly denied any suggestion that the purpose of this meeting was to negotiate over the Republicans’ demands in exchange for a continuing resolution, or a raise in the borrowing limit. He told NPR’s Mara Liasson that “today’s meeting is about the need to open the government, and the need to ensure that we do not default,” also adding that the President will not “negotiate under the threat of default. or under the threat of continuing to shut down the government.”

He later told NBC News’ Kristen Welker that the purpose of the meeting was to impress upon leaders the stakes involved in the shutdown, and the threat of a government default. Carney added that the President “will make clear to them his willingness, his year-long willingness, his presidency-long willingness, to sit down and try to find compromise with the Republicans on budget priorities, and ways to reduce our deficit in a responsible manner,” but that “he won’t allow the American economy and the American middle class to be held hostage to the partisan demands of a minority within one house of one branch of government.”

Carney also told Politico’s Carol Lee that “it is absolutely the President’s position that he won’t negotiate under threat of default or continued shutdown of the government budget priorities because the Republicans are interested in holding the economy hostage, and the middle class hostage, to try to achieve through that process what they could not achieve through cCongress in the past, through the courts, or through the ballot box.”

Carney did make repeated references to the President’s willingness to negotiate on budgets once these crises are past, so it’s possible that, aside from a scared straight lecture about the consequences of default, the President will give Boehner and McConnell some indication of what might be possible in a post-crisis negotiation. It will be interesting to see the post-meeting readouts from the various camps.