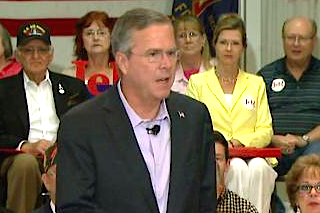 For the second time this month, Jeb Bush has said something that is bound to end up in a general election attack ad, should he ever surpass Donald Trump.

Answering a question about federal funding for Planned Parenthood at a town hall meeting in Colorado, the Republican candidate reportedly said, “I, for one, don’t think Planned Parenthood ought to get a penny though, and that’s the difference because they’re not actually doing women’s health issues.”

It was at the Southern Baptist Forum in Nashville, Tennessee earlier this month that Bush uttered the line, “I’m not sure we need half a billion dollars for women’s health issues.”

In both instances, Hillary Clinton’s campaign fired back at Bush, this time highlighting the services Planned Parenthood provides beyond just abortions:

Similarly, Planned Parenthood tweeted at Bush with a graphic that detailed 10.6 million services it provided to women in 2013:

FYI, @JebBush: This is women's health care. And it's what #PlannedParenthood does. pic.twitter.com/iqKPWHrPCU

Following his original comments about funding for women’s health issues, Bush ended up releasing a statement in which he said he “misspoke,” noting, “there are countless community health centers, rural clinics, and other women’s health organizations that need to be fully funded.” He has yet to walk back his latest comments on Planned Parenthood.