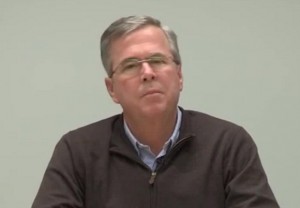 Former Florida Governor and current presidential runtrunner™ Jeb Bush can’t seem to do much right these days, including making a coherent racist statement, it would appear. In a lengthy interview with the Des Moines Register editorial board this week, Bush was asked what role the federal government should play in dealing with unrest between police and minorities, and specifically on the civil rights aspects of those cases.

Jeb’s reply is horribly offensive, but only after you figure out what the f*ck he’s talking about. He begins with a riff about how disabled people are “as valuable in our society as anybody else,” then for some reason makes the observation that most crime in black communities is “black on black,” which somehow has something to do with him not being sure that state violence against unarmed black men is really a civil rights issue, but sure, he guesses it is:

“Yeah, if there is discrimination, overt discrimination, put aside a police officer shooting a black man, because most of the crimes are black on black in the communities, most, by far, in the predominantly African-American communities it’s black-on-black crime. The police shootings of unarmed black males, which is what the conversation is about, as I understand it, is very small.

So, I’m not sure that that’s necessarily a civil rights issue, but if it is, yeah, of course the federal government has a, the Justice Department has the right and a responsibility to enforce the law. But I think it’s gone beyond that, that’s my point.”

I honestly can’t figure out what Jeb is talking about, but it sounds like he’s saying that since there’s so much crime in black neighborhoods, it’s maybe a wonder more black men aren’t getting shot by cops? Or maybe he just mentioned black-on-black crime as some sort of Republican autonomic response, like a gag reflex? Whatever it is, “black-on-black crime” is a racist trope that ignores the fact that most crimes against whites are committed by whites, and Jeb is clearly invoking it to excuse or mitigate state violence in some way.

State violence which, by the way, Jeb characterizes as “what the conversation is about, as I understand it,” and then demonstrates that, whether it is or is not a civil rights issue, Jeb Bush does not care about.

If this were any other politician in any other setting, I’d say he was trying to signal to the resentful Trump whites in his party that he’s not going to make a big deal about black issues, but Bush’s contempt and apathy are too spontaneous and natural to be calculated. He really doesn’t know, or care, anything about police violence against black people.