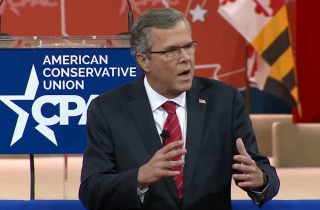 The maybe-scandal comes from the Oct. 16, 1968 edition of Phillips Academy Andover’s student newspaper The Phillipian, which detailed young Bush’s attempt to make the “Socialist Anti-Nationalist Party” a member of the Andover Student Union, a school debate society:

“Two new political groups, the Anarchist Non-Party and the Socialist Anti-Nationalist Party were formed this week with the ultimate intention of joining the Andover Student Political Union,” reads the Oct. 16, 1968, edition of the school’s newspaper. “Members from both new groups expressed their dissatisfaction with the five existing parties.”

Bush, according to the account, was attempting to form the party with classmates Jim Steinberg and Charlie Finch. Finch and Steinberg, by all newspaper accounts, were active young leftists in the political scene at school. Bush has been described as somewhat apolitical interested in smoking pot and playing tennis (very, very well).

“The Socialist Anti-Nationalist Party under the direction of lowers Jim Steinberg and Jeb Bush and upper Charlie Finch, feels that, ‘Nationalism is the sole cause of hatred and war in the world today.’ Therefore, they advocate the abolition of nationalism and the joining of all countries to form ‘one nation-one people.’”

When contacted, Finch, a now-retired journalist, called the article “some sophomore bullshit” written by Richard Samp, “who he referred to as ‘a preppy douche’ attempting to mess with him and Bush.” Samp, now a D.C. attorney, insisted that Bush was part of the party, but “would not put it past them” to create the party “as a joke.” Other former Phillipians agreed that the party was probably the result of some unsupervised 16-year-olds dicking around. (These young dicks eventually went on to prominent positions, because that’s what Phillips Andover does.)

(In a personal aside, I’m inclined to believe them: I can say from first-hand experience that prep school kids do some silly things because they are children who sometimes don’t live with their parents. As a junior, I once started a fake Church of Xenu on campus as a joke after going on a brief anti-Scientology kick. Am I currently a cultist that worships a fictitious alien overlord who opposes the tenets of Scientology? I certainly can’t tell. Xenu now controls my mind with thetans, or something.)