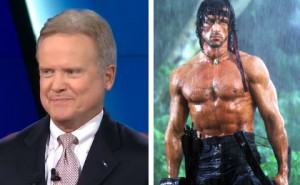 Just in case you missed last night’s first Democratic debate on CNN, one of the highlights of the evening was former Virginia Senator Jim Webb‘s reference to killing a man during the Vietnam War.

When debate moderator Anderson Cooper asked the candidates which enemy they were most proud of, Webb responded with a slight smile: “I’d have to say the enemy soldier that threw the grenade that wounded me, but he’s not around right now to talk to.” In other words, he was proud for having killed his enemy. Holy sh…

Gawker dug up the citation for the Navy Cross Webb received for his actions in Vietnam. Turns out, Webb killed several guys, and he did it with the Hollywood-fueled machismo of a Rambo movie:

On 10 July 1969, while participating in a company-sized search and destroy operation deep in hostile territory, First Lieutenant Webb’s platoon discovered a well-camouflaged bunker complex which appeared to be unoccupied. Deploying his men into defensive positions, First Lieutenant Webb was advancing to the first bunker when three enemy soldiers armed with hand grenades jumped out. Reacting instantly, he grabbed the closest man and, brandishing his .45 caliber pistol at the others, apprehended all three of the soldiers. Accompanied by one of his men, he then approached the second bunker and called for the enemy to surrender. When the hostile soldiers failed to answer him and threw a grenade which detonated dangerously close to him, First Lieutenant Webb detonated a claymore mine in the bunker aperture, accounting for two enemy casualties and disclosing the entrance to a tunnel. Despite the smoke and debris from the explosion and the possibility of enemy soldiers hiding in the tunnel, he then conducted a thorough search which yielded several items of equipment and numerous documents containing valuable intelligence data. Continuing the assault, he approached a third bunker and was preparing to fire into it when the enemy threw another grenade. Observing the grenade land dangerously close to his companion, First Lieutenant Webb simultaneously fired his weapon at the enemy, pushed the Marine away from the grenade, and shielded him from the explosion with his own body. Although sustaining painful fragmentation wounds from the explosion, he managed to throw a grenade into the aperture and completely destroy the remaining bunker.

Let me take this opportunity to apologize for making fun of you, Mr. Webb. Please don’t kill me in my sleep.