Miss Me Yet? - Billboard - Jimmy Carter 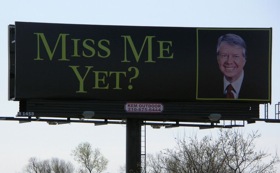 Much like LOLCats and Kanye West, the “Miss Me Yet?” billboard phenomenon is the meme that keeps on giving. It all started with an anonymous billboard over Minnesota presenting passersby with a joyful waving image of George W. Bush asking “Miss me yet?” Once the story hit the national news cycle, it took only a few days for one of the men funding the project to appear on Fox and Friends. The phenomenon continued with several earnest anti-Obama posters that were not funny, and the Minnesotan resurgence of The Gipper. The next chapter of this compelling story takes us all the way down to Texas, where Jimmy Carter fights back.

NPR is also confirming that the Jimmy Carter version of “Miss Me Yet?”, which seems to be another conservative parody conveying the exact opposite of what the Bush billboard did, is not a Photoshop job, but an actual billboard looping over I-45 outside of Dallas. The sign, according to the president of billboard company KEM Outdoor Paul Covey, confirms that the sign went up Monday, and the broker who arranged the deal, Steve Cosio, confirms the conservative intentions. Speaking for the anonymous patron, he told NPR “it was basically to build on the message from the billboard in Minnesota ‘and as a result of the health care bill that was (just) passed.'” We can only hope that every time Congress passes any legislation, it will prompt a new billboard.

This isn’t the first time Carter appears in the great advertisements in the sky, however. This little gem— while not as funny– appeared over Grand Junction, Colorado sometimes last week. That time, Carter was just relieved someone did a better job than he did. Major comedy points for adding “paid for by a small business owner” to the bottom of that one, which makes it completely unclear whether it’s an attack from the left or the right.

So it looks like at this point the name of the game is to fund giant billboards across highways featuring the politician most likely to cause the residents of that area to pop a blood vessel. Bush in Al Franken land, Reagan in the one state that didn’t give him electoral votes, and now Carter in the conservative heartland makes me wonder who could possibly pop up next, and where? I, for one, have been missing Richard Nixon for some time, so if any small business owner has a few extra thousands to spare in Times Square, they’d be greatly appreciated.