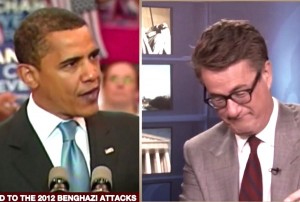 It’s been a rough 2016 election for Morning Joe host Joe Scarborough, so on Wednesday morning, the former Florida congressman took a few minutes to soothe his aching soul by lashing out at Senator Barack Obama (D-IL) of the Year 2008. In a truly embarrassing display of impotent deflection and false equivalence, Scarborough opened a segment by mocking then-Senator Obama’s 2008 nomination acceptance speech, and comparing that candidate’s self-regard with that of current Republican nominee Donald Trump:

The segment wasn’t building to anything, it was just Scarborough soothing his butthurt over being stuck with a nominee like Donald Trump by getting his jollies slamming Obama. There’s just one tiny problem with all of this, aside from Scarborough’s sickening disrespect and uppitiness innuendo, and that is that President Obama delivered on every one of those promises he made in that clip. This really was the moment when we began to provide care for the sick (uninsured rate has fallen to 11%) and good jobs to the jobless (15 million jobs created in 77 months); this was the moment when the rise of the oceans began to slow and our planet began to heal (cut carbon emissions in U.S. and secured global climate agreement); this was the moment when we ended a war (just ask Trump) and secured our nation and restored our image as the last, best hope on Earth (global opinion of U.S. continues to rise).

Also, not for nothing, the guy literally saved the global economy and killed bin Laden. You don’t have to love him, and God knows you don’t even have to respect him if you’re a Republican, but you do have to face facts: President Obama is not Donald Trump, and all the forced giggling on your morning TV show won’t change that.

Here’s President Obama’s full victory speech from June 3, 2008 in St. Paul, Minnesota, not in front of any Greek columns in Denver: