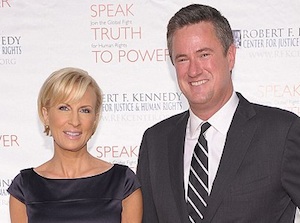 In a comprehensive phone interview with Newsbusters‘ associate editor Noel Sheppard Morning Joe host Joe Scarborough discussed his program’s format and his reputation as “the lone conservative host on MSNBC.” “I love the format. I love the ability of bringing people on and being able to interview them for ten, fifteen minutes. You just can’t do that anywhere else on cable or broadcast TV,” he said. At one point in the discussion, Scarborough divulged that his co-host Mika Brzezinski was pro-life and pro-gun.

NEWSBUSTERS: Alright, so a typical lineup when the program opens in the morning could be you with Mika on your right who’s extremely liberal, correct?

SCARBOROUGH: Mika is liberal in some areas, she’s also conservative in areas that would surprise you on social issues. She’s pro-Life and pro-guns.

NEWSBUSTERS: But you consider her to be liberal.

Scarborough also revealed Willie Geist was an independent. “I think he’s dead in the center,” Scarborough disclosed. “I think his time in Tennessee in college moderated his views. Again, I don’t really know. I work with the guy every day, and I can tell you when people start spewing Democratic lines, he rolls his eyes. But when people on the far-right come and spew conservative lines, he rolls his eyes as well. I think he’s like a lot of young voters. I think he’s independent.”

When questioned by the Huffington Post about Scarborough’s revelation about her political stances, Brzezinski demurred. “I stay away — my opinions on those two issues are admittedly convoluted. That’s why I would never run for office.”

Listen to the interview between Sheppard and Scarborough below: