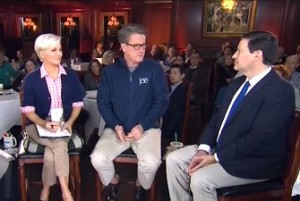 Joe Scarborough is totally not a “supporter” of Republican presidential frontrunner Donald Trump, he just objectively can’t believe that his own network knows how to conduct an accurate poll, apparently. For the past twelve hours or so, MSNBC has been touting a new NBC News/Wall Street Journal poll they say shows a national “collapse” of Trump’ support, placing Trump two points behind Cruz and showing a 15-point swing between Trump and Cruz since January.

On Thursday morning’s Morning Joe, however, host Joe Scarborough and his minions were absolutely convinced that somehow, those numbers had to be cooked:

Scarborough: I’m hearing, the sounds of a thousand pollsters scratching their heads simultaneously.You have a Quinnipiac poll that came out yesterday showing Trump ahead by over 20 points. You have a Reuters poll that I think has Trump up by 25 points. We just showed you the “USA Today” poll that has Trump up by 15, 16, 17 points. To say this >NBC News/Wall Street Journal poll is an outlier is a very, very liberal use of the term outlier.

Halperin: The NBC News/Wall Street Journal poll is a very good poll, it’s very methodologically sound. But even the best pollster, sometimes something goes wrong with the methodology you get a bad sample, so I don’t think anybody thinks Donald Trump is tied with Ted Cruz nationally.

Now, the “outlier” is a familiar concept in opinion polling, and it is a real thing, and maybe this poll is an  outlier, but there’s nothing to indicate that. None of the polls Scarborough cited were taken completely after Saturday’s debate, a fact that you ought to mention when you’re calling your own network’s poll an outlier. In order to properly judge, you’d have to compare it with like polls, and since the operating theory iis that Saturday’s debate damaged Trump, you’d have to wait for more polls to come out to determine that.

Not to worry, though, because even if Trump is trailing Cruz, a couple more MSNBC documentaries and town halls ought to clear that right up.