Joe Scarborough: “The Most Conservative Guy At A Liberal TV Network” 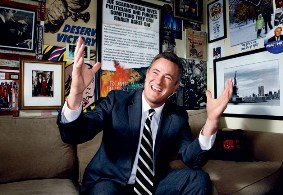 MSNBC’s resident former GOP congressman Joe Scarborough is the subject of a lengthy, glowing profile in this month’s GQ. Tagline: “If everyone on television were like MSNBC’s Joe Scarborough, television would be a much more civilized place.”

But what may be most interesting is how he describes his employer – the “liberal TV network” MSNBC.

It’s clear from the outset that Lisa DePaulo is a fan: “To really understand Joe Scarborough, to understand why he’s the conservative liberals suddenly think is swell, to understand why Morning Joe has become the best and most buzzed-about political show on television…”

But the most significant quotes come from Scarborough himself:

I’m the most conservative guy at a liberal TV network. And believe it or not, they considered me to be a liberal guy on my radio network [ABC]. Where Rush Limbaugh and Sean Hannity work. They actually told me, ‘We never had a liberal working for us before. It’ll be interesting selling advertising.’ And I sat there thinking, ‘I want to shut down the Department of Education and send all the money back home to the states. Who’s more conservative than me?’

Commenters – your thoughts? Obviously, Scarborough’s independent streak, on display for three hours a day on MSNBC, has turned some conservatives against him and some liberals thinking he’s turning a corner. Still, he says he’s proud of “the fact that I have survived at MSNBC. For seven years. It has been a tough ride.”

There’s also an interesting section about Hillary Clinton, who Scarborough’s staff says he has a crush on. “If I do have a crush on her, that means I’m turned on by competence,” he said.

Finally, to get a good idea of what it’s like in a live TV control room, here’s a description of one morning and Morning Joe EP Chris Licht. Hide the kids:

Then CNN is slow to release Hillary, who is supposed to be live on Morning Joe—like, now. “I’m gonna fucking punch John Roberts myself,” says Licht. “Fuck, they’re giving it to us a minute and a half late. Fucking assholes.” He instructs another producer to tell Fox News, where Hillary is going next, that she may be a bit late, “because unlike CNN, I’m not a douchebag!” Then he starts flipping out because there’s only one feed from Haiti and it’s going to the freaking Today show.