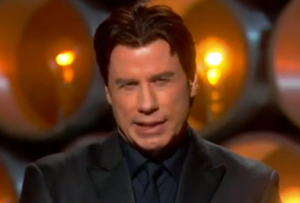 How would you feel if you’re about to give a highly-anticipated performance at arguably the biggest awards ceremony ever and right before you start singing the person introducing you royally screws up your name? Well, that’s what happened to Broadway star Idina Menzel right before she performed “Let It Go”, the incredibly popular song from the Disney movie Frozen. John Travolta introduced her as “Adele Dazeem.” The flub let to all sorts of mockery, including Slate’s masterful “Travoltify Your Name” widget.

Netflix even joined in the fun.

And there was also this tongue-in-cheek ad put out by the official Twitter account for the new Broadway musical Menzel is starring in.

And now, finally, Travolta himself has weighed in, sending a statement to TODAY.com about the embarrassing moment.

“I’ve been beating myself up all day. Then I thought … what would Idina Menzel say, She’d say, Let it go, let it go! Idina is incredibly talented and I am so happy Frozen took home two Oscars Sunday night!”

And on top of that, E! Online reports that while Menzel didn’t weigh in publicly, she “laughed it off” after hearing about what Travolta said, so all’s well that ends well, I guess.

Watch the clip of Travolta’s flub below, via ABC: