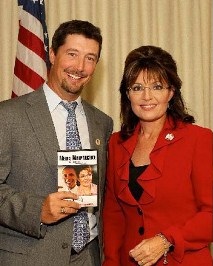 In a sprawling exposé for The Daily Caller, filmmaker (and occasional Mediaite guest columnist) John Ziegler airs several years worth of gripes about his relationship with Sarah Palin and her team, among them that Todd Palin approached him in May about a role in a possible 2012 presidential bid:

In early May, I got the random call from Todd, apparently sounding me out about working on a potential campaign for Sarah (though I rarely knew for sure why Todd was really calling). By then, I’d already become convinced that she was actually going to run in 2012, so the conversation simply removed most of the remaining doubt. I actually considered it for a while as a Barry Goldwater-type campaign seemed fun—until I was reminded of all the frustrations that had been building since I was first jerked around by Sarah’s split-personality advisers back in 2008.

Ziegler, more than anyone, is responsible for creating the alternate history of the 2008 campaign upon which much of the current Palin brand is based, but he clearly feels burned by Palin, and fears that a Palin run could, in turn, burn the Republicans. While he still professes admiration and respect for Palin, the premise of the piece is a plea for her to “sit this one out.”

The piece is a behind-the-curtain look at Ziegler’s relationship with Palin and her people for the last several years, and while it will likely leave Ziegler without much of a constituency, he doesn’t pull any punches. Here are some of the highlights:

One of the more revealing anecdotes from Ziegler’s story illustrates the loyalty Palin commanded from Ziegler, and the degree to which she returned it:

My relationship with Sarah hit another pothole early in 2010 when I advised her via e-mail that her upcoming speech to the Tea Party Convention in Nashville was creating controversy because the event was both expensive and for-profit.

She forwarded my message to her team, apparently forgetting to delete my address, with the comment, “If I have to suffer thru Ziegler’s e-mails, we ALL have to suffer thru.” Wow, that was a punch in the gut. Less than four minutes later, a panicked follow-up pinged into my Blackberry’s inbox: “John—pls [sic] know that was a joke! . . . you’re [sic] advice is very good, we have announced I will not be financially gaining from the speech, we need to get that word out there.”