Jon Stewart’s ‘Sanity’ Rally Is Freaking Out Some Democrats 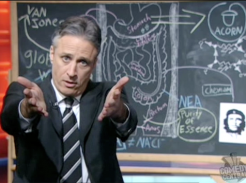 Not that long ago stories were circling that Glenn Beck et al. were making the GOP nervous with their uber-popular and polemic talk. Those stories have mainly disappeared as the reality of who holds the power in the conservative party has become all too apparent (GOPers think twice these days before opposing them), but now it seems some members of the Democrats might be suffering similar fears about Jon Stewart. From Ben Smith:

Nearly 100,000 people have written on Facebook that they’re planning to attend…But the planned event has also produced a bit of hand-wringing among Democrats. For one thing, Stewart hasn’t mentioned that labor groups and other institutional Democratic organizations are already planning a big Washington rally to counter Beck: The One America rally on October 2, which has been struggling to get the kind of attention Beck does. And the Stewart rally is also, for Democratic field operatives, at an inconvenient time: Its participants are “not doing GOTV on GOTV weekend” said Matt Ortega, a former DNC staffer, referring to a weekend typically spent knocking on doors and making calls in one’s home district, not Washington.

But is the Beck vs. Stewart rally a fair comparison? As David Carr pointed out this morning Jon Stewart‘s “career and influence are built on observing politics from a coolly ironic distance” not engendering passionate political movements. While Beck is utterly sincere in his efforts to turn his followers in a certain direction (political or otherwise) Stewart is merely keen to point out the general hypocrisy in all groups, never what he thinks people should be doing. Sounds like what the Dems have mostly to worry about is that Stewart will included them in his ridiculing.

Meanwhile, Chris Hayes tells Smith that the opposing rallies put “puts our current ideological predicament in stark terms”: “On the right, a large, well-funded, organized, ideologically zealous movement dedicated to a genuinely reactionary vision of America. On the other side? A very gifted satirist calling for everyone to just chill.”