Jon Stewart To Oprah: ‘Glenn Beck Is My Moneymaker’
video

Jon Stewart To Oprah: ‘Glenn Beck Is My Moneymaker’ 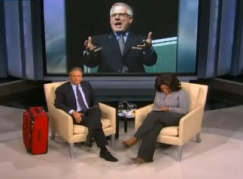 Cult of personalities collide! Jon Stewart appeared on Oprah Winfrey today ostensibly to promote his new book Earth. Inevitably Oprah asked him about his upcoming Rally to Restore Sanity, the Ground Zero Mosque, and the Immigration debate. All good stuff. But it wasn’t until later in the show that Glenn Beck‘s name came up after Oprah showed his picture on the screen and asked Stewart to respond: “That’s Glenn Beck! He’s my moneymaker! You know what I call him? My kids college fund!” Indeed.

Earlier Stewart explained to Oprah he was throwing his rally for the 85% of the country that is “busy” and doesn’t have time to choose sides: “We want to have a rally on the mall to say it’s not the silent majority, it’s the busy majority and it’s the majority of people who say ‘can you tone it down a notch.'”

Stewart went on to weigh in on the Ground Zero Mosque (“If God had wanted us to burn holy books would he have made them so tantalizingly flammable?”) and the immigration debate, though if you are a fan of his show none of what he said will be terribly new.

It will be fascinating to see whether this Oprah appearance translates into attendees at the Stewart rally; I imagine this is the first time many of her viewers have heard of Stewart’s rally. Also, all I could think watching Stewart and Oprah discuss this rally was when is Oprah going to have Glenn Beck on; that would be an interview for the ages and not simply because there are a lot of similarities between the two. Watch clips from the segment below.