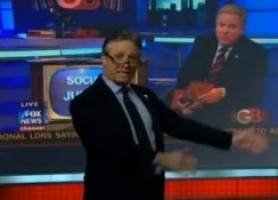 As we suspected long ago, we can now officially confirm that Glenn Beck isn’t just considered a “joke” in some circles, he is now important and influential enough to merit a nearly 15 minute parody by America’s “most trusted” news personality, Jon Stewart. The take-down was beyond complete; Daily Show writers and producers revealed that they are meticulous students of Beck’s production methods: they didn’t miss a trick.

Legend has it that when the great Greek philosophers like Aristotle and Socrates were publicly mocked by their counterpart playwrights, they were not offended – in fact they were pleased to achieved that level of notoriety and import to receive such treatment. An apt metaphor, perhaps, for the epic, thorough and very public mocking that Jon Stewart gave to Glenn Beck last night – from cold-open to the syllogistically flimsy blackboard. There was also the trademark odd and faux-improvised moments, the sneaker with suit look and the signature walk around the studio and emotional pauses that make The Glenn Beck Show so watchable.

Ironically, while Beck and Stewart are cut from a completely different cloth, there are many similarities in what they do on a nightly basis. Both take what they deem as absurd platitudes voiced by someone in the public arena, then amplify that to a level that brings comedy, fear, or sometimes both. The thing is that, while The Daily Show with Jon Stewart calls itself a “fake news show,” it’s really a news program disguised as comedy show. You could say something similar about The Glenn Beck Show, though cynics might say that his show appears to be more of a (tragic) comedy program, disguised as a news show. A slight, yet very significant difference.