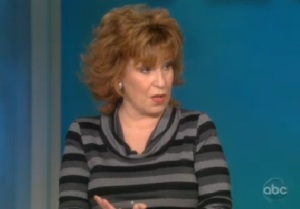 The hosts of The View were still discussing the ongoing media brouhaha between NPR and Fox News over the firing of Juan Williams. Barbara Walters opened the discussion by discussing the current state of media – from opiniotainment to straight up journalism. Co-host Joy Behar predictably stepped in to defend NPR and used an odd way to explain their value, claiming that NPR’s been ‘vetted by objective ‘Media Matters’ people.”

Calling Media Matters “objective” is an interesting choice of words, since they define themselves as a “progressive research and information center dedicated to comprehensively monitoring, analyzing, and correcting conservative misinformation in the U.S. media.”

Media Matters has reported some great stories and, on occasion, has been a bastion of reasoned examples of media bias. But they also have been known to, on occasion, report clips that are completely out of context. So while Media Matters is a fun site to read (for a variety of reasons), they aren’t exactly objective.

Transcript of the exchange follows the video below:

Barbara Walters: It’s why i sometimes have trouble here and don’t give my opinion because i’m also with abc news. if you are a commentator and you’re giving opinions, you’re in one category.

Sherri Sheppard: I that a pundit?

Walters: You can call it a pundit. If you are giving the news straight, you’re not supposed to give your opinions. Now, that’s changed so much. We’re in a whole other time now. everybody has an opinion. If you don’t make more noise or scream louder or so on, you don’t get the rating. So it is a funny blurred line. they said he’s a journalist, he’s a correspondent, he’s not supposed to give opinions. but when he goes on another cable show like fox and does it — so it’s a very blurry line. In the meantime, we hope he’ll come on with us and, if nothing else, give Joy and Whoopi 10%.

Sherri Sheppard: Bring your checkbook with you.

Joy Behar: I don’t need the money. but the thing of it is that npr has been vetted by objective media matter type people and they have found that —

Behar: I don’t know if it’s media matters. maybe someone could find this out for me. they have found npr is very balanced, unlike fox, which is not balanced. fox has now become the arm of the republican party.

Hasselback: That’s such a talking point, joy. it’s not true.

Behar: It is true.

Hasselback: It is not true.

Behar: People who are running for office are commentators on Fox.

Walters: Fox says their news is fair but they are a very conservative cable with a particular point of view. i would like to ask our friend Bill O’reilly, who is still with the subject every night on his program, i think we should get 10% of his salary.