Kasich Racks Up NYT, Boston Globe Endorsements, But in 2016… That Ain’t Such a Good Thing
Opinion

Kasich Racks Up NYT, Boston Globe Endorsements, But in 2016… That Ain’t Such a Good Thing 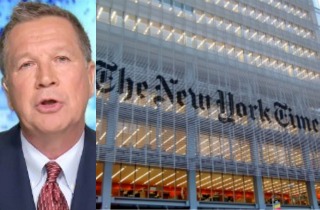 There was once a time that newspaper endorsements for presidential candidates were pretty big deals. But with trust in media at historically its lowest level — especially among Republicans who feel they’re always running uphill against a biased wind — gaining an endorsement from the New York Times or Boston Globe can be seen as a curse instead of a blessing in the angry political world of 2016.

Exhibit A today is John Kasich, who has more legislative successes, experience, and arguably a more impressive resume than anyone in the field regardless of party. As Ohio governor, he’s turned an $8 billion deficit into a $2 billion surplus. He was one of the chief architects of the balanced budget amendment achieved during the Clinton administration as chair of the budget committee. He’s cut taxes in Ohio and unemployment has been reduced by half in the state. And at a time when foreign policy and terrorism is a top-2 concern, his time on the House Armed Services Committee makes him a complete candidate.

From a personal perspective, he’s never remotely approached anything resembling scandal and even Democrats would grudgingly admit he comes across as reasonable, pragmatic, measured and honest. His approval rating in Ohio, which went twice for Obama, is at 62 percent. If this was 2008 or 2012, it’s hard not to imagine Kasich winning the nomination given the aforementioned resume. But this is 2016, a time when negotiating with the other side and making deals is mocked… portrayed as a sign of weakness (unless you’re Donald Trump).

But Kasich expanding Medicaid in Ohio is profoundly toxic to the base, despite all the empty talk from GOP politicians around “doing something” to treat those behind mass shootings who suffer from mental illness. The connection? Kasich is the only candidate in the race who can say he’s actually trying to tackle the issue of mental illness (and drug addiction) by opening centers and housing while expanding treatment in the state. Expanding government in 2016 in any capacity is a big no-no, however, so those to the right of Kasich dismiss all of the successes above and focus solely on this one item as a disqualifier.

Now add a second disqualifier among the hard-core base: The endorsement of the New York Times that comes today two days before the Iowa caucuses.

“You want to have everybody for you,” Kasich, polling in single digits in most national GOP polls, told Neil Cavuto. “I’ve been a conservative all of my life but I’m an includer.”

The Gray Lady’s backing comes on the heels of Kasich also capturing endorsements from two major New England newspapers in the Boston Globe and New Hampshire’s Concord Monitor. Kasich is currently second in the Granite State, 18 points behind frontrunner Donald Trump in the Real Clear Politics average. Add it all up and Kasich has what would normally be a phenomenal week. Except…

NYT endorses John Kasich in the GOP race, therefore ensuring he has absolutely no chance. https://t.co/nR0q71nyNf

If you wanted to be helpful, NYT Edit Board, you'd denounce John Kasich as a threat to all you hold most dear https://t.co/8WccpSxbEy

Truth be told, it’s not like the New York Times would ever dream of endorsing any Republican on a presidential level. It even found a way to support Mondale in ’84 when even New York and California went red for Reagan. 1956: That’s the last time the Times has endorsed a Republican for president. So even though the words were kind for Kasich now, if by some miracle he did earn the nomination — or more likely — get named someone’s VP choice, the Times will find a way to endorse Hillary Clinton, which it did today in hilarious fashion by touting her positives without ever mentioning that little FBI email investigation that appears to be heading towards an indictment, nor broaching her challenges around honesty. Utterly stunning for a paper considered the apex of journalism.

Back to Kasich, give him major credit for this: He’s standing by his campaign theme of being someone who gets things done by working with others. He cites his past and current accomplishments as evidence. But this election isn’t about compromise or experience. It sure ain’t about pragmatism and experience. And it definitely isn’t about precedent.

For if it was, the kind of newspaper endorsements John Kasich has been receiving would actually be seen as a good thing.