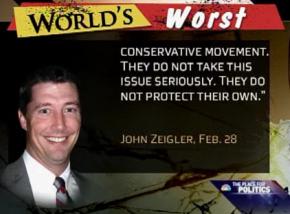 Today is the first day of the rest of Going Rogue’s life, and the beginning of what is sure to be a media avalanche of fact-checking, mock-checking, charges, and counter-charges. If the media is true to form, the result will be more food for the Palin media martyr machine, and more bleed-through of silliness like the “Death Panel.”

Not long ago, on these very pages, John Ziegler prescribed the antidote to this circus: a live debate with Countdown’s Keith Olbermann. Today, I say “Help us, Olby Wan KeithOlby, you’re our only hope!”

This is an opportunity to cut away all of the distractions and get right to the heart of the matter. Sure, the press has been unfair to Palin at times, but they were unfair to Mario Mendoza, too. That didn’t change the fact that he was a .215 hitter. A debate with Ziegler could settle the score once and for all, and would be the next best thing to debating Palin herself. From what I’ve read, Palin’s ghostwriter leaned heavily on the copy of Ziegler’s movie that was given to him at the start of the project.

Here, then, are my reasons why Keith Olbermann should, nay must, accept Ziegler’s challenge today.

Like Him or Not, He Puts on a Helluva Show

You can apply that statement to both Ziegler and Olbermann. While Ziegler’s “Media Malpractice” film won’t win any awards for objectivity, it’s undeniably entertaining. Conservatives will cheer through it, liberals will hiss, but nobody’s going to cop any z’s during it.

As for Keith, his show sets the bar for propulsive political entertainment. It’s a handy one-stop shop for the pulse of the American center-left, made digestible with a sleek format and regular sprinklings of pop-culture sugar to offset the political salt.

He’s Asking For it

Keith, have you read John Ziegler’s review of Going Rogue? I think he put this line in there just for you:

For many reasons, this is by far the best book and greatest literary achievement by a political figure in my lifetime.

Actually, he pretty much cops to it, saying he’s going “out on the type of limb that will make MSNBC hosts salivate.” That’s like a double-dare.

You’re The Place For Politics

Much of the sound and fury surrounding Palin has to do with personal intrigue and insults to the former Alaska governor. The one time the media had a crack at Palin on policy (the infamous “Death Panels”), they failed miserably. That includes your pal, Eugene Robinson.

This is your chance to focus, like a laser, on Palin’s political weaknesses, some of which she brags about. You think she can’t convince people that quitting her job as Alaska governor is a sign of strong leadership? I thought that move would finish her off. I talked to Ziegler that day, and he offered to bet me it wouldn’t. I’m glad I didn’t make that bet. Which leads me to my next point.

I’ve said all along that the best thing liberals can do about Palin is get out of her way, let her win the 2012 GOP nomination, and watch Barack Obama mop the floor with her. I’m not so sure about that anymore. With our microscopic news cycle getting ever-smaller, political memory is short. While 71% of Americans now feel that she is unqualified for the job, it is important to remember that Barack Obama faced a similar knock right up until he won the election. Ironically, like Obama, Palin is a political anomaly (of a different sort). It’s tough to predict how the ball is going to bounce.

One thing is for sure, with the Republicans lacking anything resembling a superstar for 2012, Palin is the name to beat in the GOP. A few bad hops, and we could be covering President Palin’s War on MSNBC. That’s why it is important to challenge Going Rogue on the politics, not the “he said/she said” that’s getting all the play now.

Ziegler Has Genuine Insight into Palin

While you may disagree with his conclusions, John Ziegler has a unique perspective on Palin. He genuinely admires her, but more than that, he understands her humanity in ways that her most ardent fans don’t. After her resignation, he predicted much of the arc of her return to prominence. He understands what people like about her.

You Kinda Owe Him

Aside from the fact that you misspelled his name when you awarded him 3rd Worst back in March, you have to admit it was kind of a low blow to accuse him of acting on a “crush” on Palin.

That’s nothing to sneeze at. Think of all the free health clinics that would pay for. Plus, you surely must appreciate Ziegler’s moxie in pulling the same charity shaming trick that you used on Palin during the campaign.

A show like this would do huge numbers, and the clips would be viral marketing gold.

So please, consider this proposal. It’s your best, most well-timed chance to make your point. I’ll even buy the popcorn.*

*I won’t really buy the popcorn.