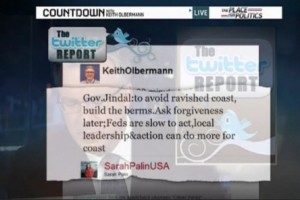 One of the best new features on Countdown, the Twitter Report, entered a new phase of usefulness last night, as Keith Olbermann used it to enshrine a Sarah Palin tweet that she later deleted. The former Alaska governor got the words “ravished” and “ravaged” mixed up, and hilarity ensued. While Keith immortalized the tweet, an unsung Twitter hero deserves credit for being the first to notice Palin’s mistake, which isn’t actually much of a mistake.

While Palin deleted the tweet from her timeline, it is still viewable in Twitterspace. I don’t know why. Here’s what she said:

@SarahPalinUSA Why do you sexualize everything? The Gulf coast is being “ravished?” Do you mean “ravaged?” What a ninny you are.4:04 PM May 31st via web in reply to SarahPalinUSA

While Palin surely did mean to say “ravaged,” the replacement with the word “ravished” isn’t entirely out of left field. As many have noted, one of the definitions of the word “ravish” is rape, and while I wouldn’t expect Palin to use a rape metaphor,  it is an apt one. The Gulf Coast certainly didn’t consent to the violation it currently suffers through.

“Ravish” is a weird-ass word, by the way. It’s one of those words that’s usually written, but that no one ever says, like “dappled” or “query.”

“Ravish” is also unusual because its meaning changes drastically when you use it as an adjective. In a twist of O’Reillyan logic, the verb form includes the rape definition, but the adjective “ravishing” simply means “Extremely attractive; entrancing.”

Personally, I’m against this kind of nit-picking, as fun as it is. Everybody makes mistakes, even ravagingly handsome writers, and most of us would appreciate a milligan on such occasions.