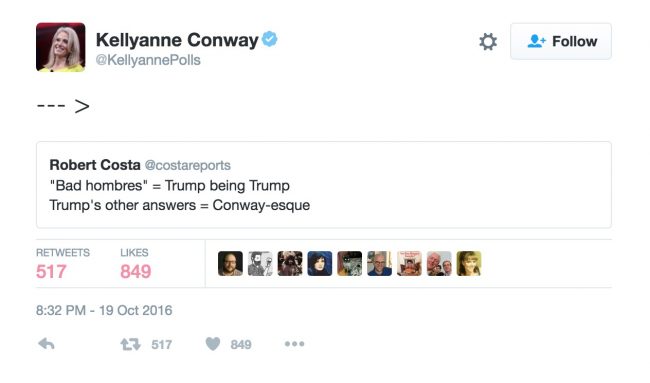 She retweeted a reference to his claim that “we have some bad hombres” in the United States, which has been trending on Twitter ever since he said it during a discussion on immigration. She added a little arrow to highlight what she perceived as a compliment.

If it strikes you as a little weird that she’s engaging in self-promotion while her boss is on stage trying to win the presidency, you’re not alone.

Is she even still working for him at this point? https://t.co/wQGjK2x7p3

.@KellyannePolls signaling that she knows how nuts her candidate is is the strangest subplot of this campaign: https://t.co/J0N4kf0otL

Already applying for your next gig, huh? https://t.co/dkWPelT306

Translation: “Please, somebody, hire me after this disastrous campaign!” https://t.co/1JS0nmVkxS

@KellyannePolls kelly that wasn’t a flattering tweet. do you understand that

Something tells me she doesn’t like her job. https://t.co/gB8Es790Xf

Are you… looking for a way out? @KellyannePolls https://t.co/5OiHHiRRLX

It’s almost as if Kellyanne has become more interested in post-election career opportunities than getting her boss elected. #debatenight https://t.co/9S3DPm6Dom

Okay, what do you think? Was she signaling that she is gunning for a new job come November 9?