‘Kill All Muslims’: Trump Supporter Goes on Threatening Tirade Against Muslims in Michigan 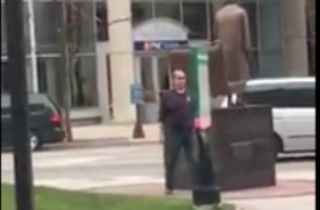 Candy Valenzuela, a passerby in downtown Grand Rapids, posted a video on her Facebook account after she came across a group of Muslims on Monday as they appeared to hold a peaceful public event. It was viewed more than 50,000 times as of Tuesday afternoon.

“Kill Muslims!” the man says. “Kill them all! Kill you all. Kill the Muslims.”

The video goes on to show the man fist-pumping to Trump’s name as he walked away. Valenzuela also made note with her account that the man later came back and tried to assault them after she stopped recording:

“After the video he actually walked by them, tried to swing, missed and fell #racismstillexist”

While recent terror attacks have generated a climate of fear and suspicion towards Muslims around the country, Trump’s rhetoric and campaign proposals have long been criticized for potentially encouraging hostile behavior towards his protestors and those who practice Islam.

This just happened right in front of my eyes. A group of muslims preaching knowledge and this guy walks by and just…